Skip to content
To the TIDE Blog...
The Consecration of St Thomas Syriac Orthodox Cathedral in London and Britain’s historic relationship with Religious Refugees 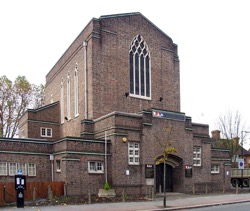 As 2016 drew to a close, Acton in West London hosted a number of dignitaries for the consecration of the first Syriac Orthodox Cathedral in Britain, St Thomas Cathedral, an event which at the time received very little media attention. Amongst the many notable figures in the congregation, were Prince Charles, Richard Chartres, the then Bishop of London, and the Patriarch of Antioch, His Holiness Mor Ignatius Aphrem II. The occasion was both a celebration of the flourishing Syriac community in Britain, and a sombre reminder of the plight of a community who having fled their homeland, in Syria and Iraq, have settled in Britain. To historians of migration, the position of the Syriac community in Britain today is a familiar story shared by differing religious communities across the centuries.

Prince Charles and the Patriarch of Antioch His Holiness Mor Ignatius Aphrem II both attended the consecration of the St Thomas Cathedral Syrian Orthodox Church in Acton, London. 24th November 2016.

In his short speech to the congregation Prince Charles noted the dual symbolism of the occasion. Not only did the consecration of the Cathedral mark a ‘deeply encouraging’ moment for the Syriac community in Britain, but it also highlighted the ‘unbearable misery and anguish that have been so cruelly inflicted upon’ the Syriac Christian community in the Middle-East. The leader of the Syriac Orthodox Church in the UK, Archbishop Mor Athanasius Toma Dawod, noted that although a celebration the event was bitter sweet as ‘our joy has not been complete, as all our churches have been left in ruins after ISIS destroyed them.’

Refugees fleeing religious persecution is an old story. Since the middle of the sixteenth century, Europe was engulfed in repeated religious conflicts which reached its climax during the Thirty Years’ War (1618-1648), and displaced thousands of people across the continent. One of the most influential moments in triggering mass religious migration was sparked by the Edict of Fountainebleu in 1685 (also known as the Revocation of the Edict of Nantes). The Edict, which significantly curtailed the rights of the Calvinist Protestants of France (also known as Huguenots), marked the high point of two centuries of intermittent persecution against communities on the basis of religion in continental Europe. 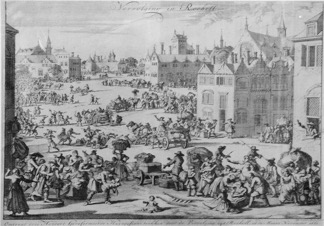 Across much of Northern Europe several religious communities were persecuted during the seventeenth century. Jan Luiken the Dutch artist produced several pictures interpreting the expulsion of Protestant communities in France such as the Expulsion from La Rochelle of 300 Protestant families in November 1661.

One seventeenth century minister graphically wrote of the plight of the people caught up in the upheavals. John Bulteel, a migrant minister, wrote of ‘the Churches of Germany swimming in their own blood, those of France in their tears, all in the midst of their ruin and apprehensions of greater dissolution.’ In England, he concluded, ‘these poor flocks’ had been ‘received, and put under covert as in a place of refuge and sanctuary of a holy temple.’

The idea that Britain was a religious sanctuary for persecuted religious communities was popular motif in the seventeenth century. One Armenian migrant, and merchant proclaimed that “the English nation hath always been esteemed in foreign countries for their civility towards strangers.” In a petition to Oliver Cromwell in the Spring of 1656 a group of French and Dutch Protestants wrote how they fled to England’ thereby swapping ‘persecution for protection’ And where, living under the protection of Cromwell and the English government the petitioners they ‘accounted themselves most happy.’

That said, then as now, refuge was often accompanied by hostility. For, many of those who arrived in England continued to face public paranoia and hostility. While the 1656 petitioners expressed their happiness to have escaped oppression in Europe, the main body of their petition detailed the behaviour of local English people, who on several occasions burned down their Church and burned carrion on their consecrated ground. Even the Armenian merchant primarily complained that he had been tricked out of money and left destitute by an Englishman. 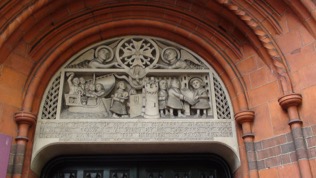 Sculpture above doorway the only remaining French Protestant Church in London, first established by royal charter in 1550 it now occupies by Aston Webb erected between 1891–93 in Soho Square.

In her letter to the congregation at St Thomas,’ the Prime Minister, Teresa May declared that ‘the appalling violence that has afflicted so many areas of the Middle East reminds us how fortunate we are to live in a country where different religious beliefs are not only tolerated, but welcomed.’ That may well be, but many in the congregation would have noted that her government had refused to allow three Archbishops from the Syriac Church to enter Britain to attend the cathedral’s consecration. Britain may be proud of its history of religious tolerance, but this is by no means an unproblematic legacy.

TIDE is delighted to have this blog post co-hosted on the Refugee History website. Read more about their activities at refugeehistory.org.