Skip to content
To the TIDE Blog...
Walking with St Christopher – A Research Trip to Norton Priory

A guest blog from our TIDE intern, Alex Claridge

Recently, Dr Lauren Working and I travelled to Norton Priory in Runcorn, Cheshire, to view the site and visit its collections. St Christopher, the patron saint of travellers, stood in the entrance hall of the museum to greet us on our arrival, as he had done for many travellers in the centuries before us. J. Patrick Green has suggested that the statue, possibly commissioned on the promotion of the Augustinian priory to abbey status in 1391, was chosen because of Norton’s proximity to the River Mersey, its role in the Mersey crossing, and its encouragement to be hospitable to travellers. 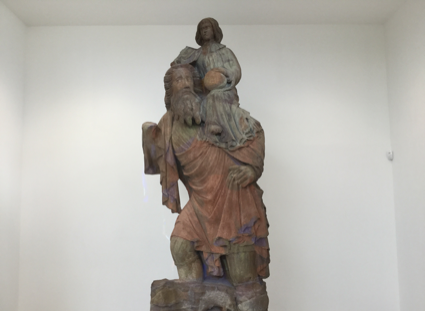 St Christopher, a medieval statue that survived the Reformation

The priory’s reputation for hospitality has not diminished over the centuries, and we were warmly received by Lynn Smith, senior keeper of the collections. We met to discuss possible collaborations between Norton Priory and TIDE, starting with the project’s #gateofaccess social media partnership, which uses artefacts as points of access to tell stories of travel and transculturality in early modern England. During our trip, we found a remarkable range of objects that reveal the connections between Merseyside and the wider world. Norton Priory is the most excavated monastic site in Europe, and it was exciting to be in a hub of such active and ongoing research. The museum incorporates the medieval under-croft with its Norman arches, the Georgian wine cellar, and the first-floor ballroom, which is now converted into exhibition space. The upstairs offers a bird’s eye view of the archaeological site of the priory, where the cruciform shape of the church is easily identifiable, its nine-hundred-year-old foundations exposing a long history of human activity.

While the medieval and the Georgian eras are particularly well-researched, TIDE hopes to shed some light on the objects dating to the period in between, which demonstrate England’s reliance on travel and international connections. Of particular interest for our project were the leather shoes from the Tudor house (built on the site after Richard Brooke’s purchase of the priory in 1545), and the wine bottles, jugs, and seals connected with the later stately house. As with many of the medieval wares, the Tudor items demonstrate the international nature of the site, and include a drinking jug imported from Cologne via Chester and a German Bellarmine jug, decorated with the face of a wild man.

We were given free rein to explore the museum, which includes clay pipes, oil lamps, ceramics, a Tudor tyg (two-handled jug), and a female skeleton. The interactive displays highlight migration patterns and Runcorn’s historic links to Dublin, London, Flanders, Saintonge, Santiago de Compostela, Hippo, Rome and Jerusalem. The museum also contains a number of early modern cooking and dining utensils that further demonstrate the priory’s reliance on European commerce and networks of trade. Our visit concluded with a wander through the garden and the pear orchard. The head gardener guided us through the grounds’ marvellous array of plants, including the recreated medieval herb garden, and pointed out diverse planting typical to early modern English households. 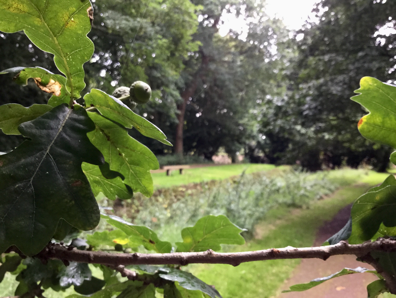 Oak and walnut trees dating to the Tudor period

To me, the site visit to Norton Priory offered a glimpse into the value and importance of interdisciplinarity. Visiting historical sites, and having conversations with specialists in other disciplines, including botany and archaeology, broadened my understanding of the historical world beyond texts. Entering the spaces of the past, and seeing its physical remnants, gave me the opportunity to develop new perspectives on the past, ones that can enrich my academic research and my understanding of how humans in the medieval and early modern eras lived their lives. Physical objects can also help instil a sense of the past to non-academics, and can be an important means of providing wider frameworks for text-based research. I was thrilled to find that the visit opened up the possibility for future collaboration, not just for #gateofaccess but through other opportunities to engage with the public through seminars, talks, and even theatre.