Skip to content
To the TIDE Blog...
Devout Pictures and Imperilled Souls: English Travellers on the Enticements of Spain 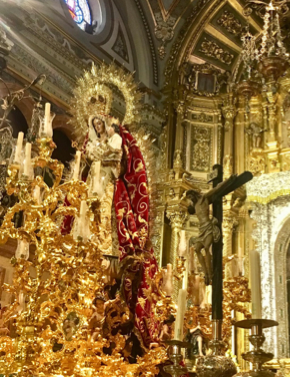 The seventeenth-century figures and furnishings in La Macarena, Seville.

A condemnation of excess, and a praise of the Aristotelian ‘golden mean’, was a rigorous benchmark for self-examination in sixteenth and seventeenth-century moral literature and political thought. Yet gentlemen also praised the desires and passions in a way that subversively celebrated the decadence of sin. ‘The Meane-observer, (whom base Safety keepes,)/Lives without honour, dies without a name,/And in eternall darkness ever sleeps’, declared Samuel Daniel in a sonnet in 1592. Daniel’s poem expressed a commitment to the pursuit of beauty even when its attainment was forbidden. To glut oneself on the sight of beauty and the allures of the flesh was perhaps ill-advised, but desire was also an inevitable part of existence. To many young gentlemen, the mean – golden, venerable, politically preferable – was also boring.

Last year's TIDE trip to Seville and Zafra for the Anglo-Iberian workshop catapulted us into the baroque and its visions of delight. Following in the trail of early modern English travellers to Spain, I began to think about how Protestants confronted the sacred sites of a Catholic country. Here was a world saturated by the emotive, passionate intimacy and yet grandeur of Christian theology – a theology that Protestants had shared with Catholics only a generation before. Gold, silver, and ornate woodwork filled dozens of early modern churches, from the vaulting splendour of Seville Cathedral to La Macarena, a later church filled with seventeenth-century figures and furnishings. Hearts were encased in wrought frames, directing the viewer to consider his or her inward being with somewhat macabre theatricality. Navigating the physical spaces of worship, and thinking about the role of art and architecture in expressing belief, revealed the importance of moving beyond Protestant rhetoric against Catholics in print to understanding the experience of travel and faith. In the messy lived reality of the Tudor and Stuart worlds, the relationship between England and Spain were hardly polarities, and we risk losing a fuller understanding of early modern identities when we fail to consider the formative weight of place, memory, and cross-cultural exchange on the individual.

It is commonplace to highlight the English aversion to Spain during this period, and certainly this existed. The unpopular Catholic reign of Mary Tudor and the Spanish Philip II, reports of the atrocities committed by Spanish armies in the Netherlands, gruesome tales of the Spanish Inquisition and the ‘Black Legend’ circulating in post-Reformation society, and the 1588 Armada all hardened English attitudes towards Spain. Anti-Spanish sentiment reached a fever pitch following the outbreak of the Thirty Years’ War in 1618, where James’ daughter, Elizabeth, became enmeshed in the Bohemian revolt against the Hapsburg dynasty. Charles I disguised himself and travelled secretly to Spain to consider the possibility of marrying the Spanish Infanta in 1623; when he returned to England empty-handed, church bells around the country rang to express triumph at God’s intervention.

And yet, while imperial envy and confessional divide led to negative English views of Spain, ignoring the allure of the Iberian Peninsula on English travellers only perpetuates stereotypes of cultural rigidity and difference. English Catholics retained close links with Spanish networks of power, as seen through Jane Dormer, for example, a lady-in-waiting to Mary I who married a Spanish ambassador and spent the next fifty years of her life in Madrid and Zafra. The hatred of Spain emerges most vehemently in the rhetoric of puritan MPs, whereas courtiers and the realm’s Catholics often celebrated the 1604 Anglo-Spanish peace. James’ close friendship with Diego Sarmiento de Acuña, Count Gondomar was a lasting if unpopular one, and merchants traded with Spain for commodities from oranges to the tobacco sourced from the Spanish West Indies. The explorer Walter Ralegh, and the geographer Richard Hakluyt, acknowledged the necessity of learning from the Iberians in their own imperial pursuits, and from an intellectual, humanist perspective, Spain remained attractive in its grandiosity. 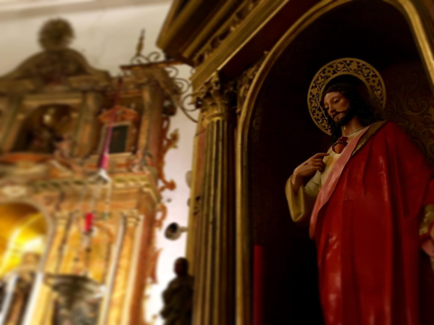 Within this context, we begin to see how receptive the English were to the palpable spaces of Spanish churches. ‘I was yesterday as the Escurial [outside Madrid] to see the Monastery of Saint Lawrence, the eighth wonder of the world,’ wrote James Howell of his travels across the Continent in the 1620s, ‘...what I have seen in Italy, and other places, are but baubles to it’. Richard Wynn, another traveller to Spain in the 1620s, described the same monastery as the finest in the world. Howell and Wynn did not, or perhaps could not, comment favourably on what Protestants viewed as a problematic relationship between baroque imagery and biblical truth. Instead, they expressed their admiration by focusing on the ingenuity and architecture of the spaces. Wynn bought a floor plan of the Escorial, modelled after Solomon’s temple, as a souvenir.

The advice of schoolmasters and Protestant polemicists against the attraction of Catholic countries begins to seem less indicative of actual cultural rigidity, and more like a fraught attempt to curb enthusiasm. ‘I was once in Italie my selfe,’ Robert Ascham wrote in 1570, ‘but I thank God, my abode there, was but ix days. And yet I saw in that little tyme, in one Citie, more libertie to sinne, then I ever heard tell in our noble Citie of London in ix yeares...For being unlike in troth of Religion, they must needes be unlike in honestie of living.’ Ascham specifically condemned the dangers brought by beholding excess: in their Churches, Catholics ‘[mask] Ceremonies, to delite the eye’. Thomas Palmer, writing his advice to travellers in 1606, though somewhat less fantastical, gravely condemned those travellers who indulged in Catholic ritual. While it was important to observe certain customs when travelling, Palmer acknowledged, ‘let men avoid to sacrifice or do reverence to any idol...For though many have so large a conscience, that they perswade themselves, so they keepe their hearts to God, they may bend their knee, and bow themselves before such trash without hurt at all, yet God will not forget the hypocrisy’. The Catholic ‘estimation of reliques & images’, Palmer maintained, must be combatted, for a traveller went to new places to gather state secrets and better themselves for the good of their country, not to imperil their souls.

The concerns voiced by Protestant writers point to the way that English travellers engaged with Spain in a manner that had the potential to influence their lives when they returned in England. Tobie Matthew created a stir by travelling lavishly through Europe in the early seventeenth century and converting to Catholicism, despite being the son of a Calvinist theologian and the archbishop of York. Happily ensconced in Italy and Spain, Matthew wrote to Dudley Carleton in 1608 proclaiming that life on the Continent enabled him to ‘eate good melons, drinke wholesome wines, [and] look upon excellent devout pictures’. The English ambassador in Venice, Henry Wotton, was damning of Matthew: he was a leader, Wotton wrote, of ‘a certain knot of bastard Catholiques’, a crew of pleasure-seeking bon vivants who had descended into debauched sensuality. Living in Catholic countries had, as Protestant authorities feared, swayed Matthew into beguiling idolatry, for he ‘appeared stronger in his perversion and professing popery more than ever’, and this influenced his political associations when he returned to London. 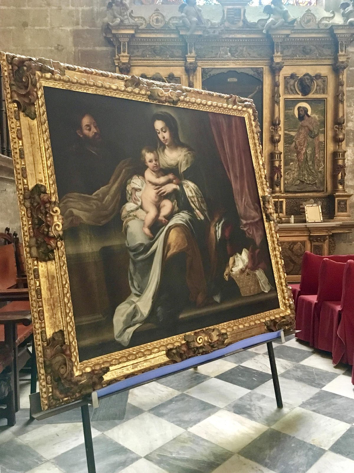 The potency of the senses on individual self-fashioning had the capacity to change a subject’s confessional and cultural identity, and it is worth thinking more about how spaces of worship and personal encounters with Catholicism moved English travellers to behave differently, to seek spiritual assurance, to make new friends or to forge political alliances that could endanger their own lives. Gold-encrusted hearts, weeping Christs, wax figures and ‘excellent devout pictures’ moved viewers to inward contemplation and outward action. Some English Catholics returned from abroad to die as condemned traitors on London scaffolds; others were shaped by their travels in the things they translated, or the committees they sat on in parliament. ‘Receive this close embrace’, wrote Luisa de Carvajal, a Spanish Catholic living in London from 1607, ‘with immense love brimming...Repose on the sacred flowering bed and inflame yourself with love so passionate...in my very own arms...you will enjoy what no one has deserved’. The palpability of Catholic space was a risky affair for Protestants, authorities knew, because they encouraged succumbing to intense feeling -- passions that were not directed to the orthodoxy of the Protestant church and the monarch at its head, but to different forms and objects of devotion.