‘Wither would you go? What country… should give you harbour? Go you to France or Flanders... Nay, anywhere that not adheres to England,/Why, you must needs be strangers…[spurned] like dogs, and like as if that God/Owed not nor made not you.’ These words are possibly the only surviving lines written in Shakespeare’s own hand in the play, the Book of Sir Thomas More, voiced by the character of More as he delivers a passionate defence of strangers and their communities to an angry crowd. The lines strike any modern reader with their uncanny relevance. Questions concerning the status of foreigners and their willingness to assimilate recur in public and academic discourse across the centuries: what does it mean to belong to a city, state or nation? Can one be a citizen of everywhere or nowhere? How has the migration of non-English groups shaped concepts of a national identity and heritage?

This July, in the uncharacteristic sweltering heat of the hottest summer in recent memory, we were fortunate enough to bring together a large, international, multi-disciplinary group of both early career researchers and established scholars to explore those issues.. ‘On Belonging: English Conceptions of Migration and Transculturality, 1550-1700’ took place at the University of Liverpool’s London campus between 26 and 28 July 2018. It sought interdisciplinary perspectives on early modern transculturality with a wide array of panels and speakers addressing a variety of topics. Over the course of these three days, scholars from institutions across the UK, Europe, America, and India examined transcultural figures and contemporary conceptual frameworks to probe the interconnected histories of local and global migration. 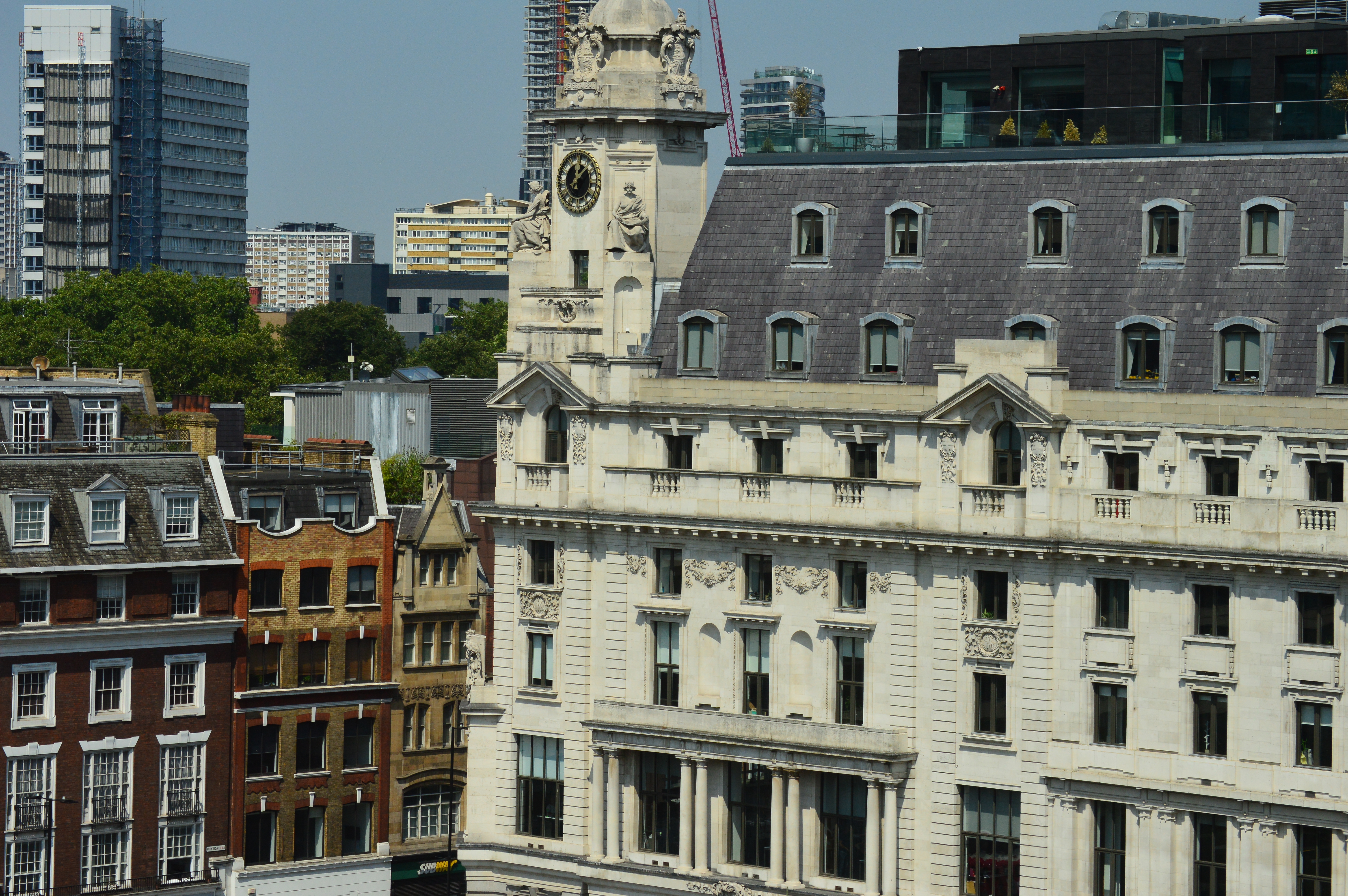 The first day of the conference focused on examining ideas of key concepts and frameworks, kicking off with a panel on ‘Immigrant Cultures and Attitudes’ or – as it was termed on twitter – lives in motion. Raingard Esser opened the discussion by taking attendees through immigrant cultures and cultural integration in early modern England, followed by Katy Gibbons examining subjects of the English crown rendered strangers through religious policy and the framework of exile. Finally, Cheryl Butler spoke on changing attitudes to immigration in Tudor Southampton. Our second panel focused on ‘Migration, Identity and Rights’, with Ruth Canning looking at Old English communities in Ireland c.1580 – 1603, Idolina Hernandez on English identity and the naturalisation of refugees within the American colonies, and Justin Meggitt on the Barbary origins of Atlantic abolitionism, with particular focus on Quaker anti-slavery discourses.

Attendees were then given a difficult choice between a pair of exploration sessions. ‘New Directions in the Cultural History of Travel, Mobility and Transculturality’ was led by Liesbeth Corens, John Gallagher, Eva Joanna Holmberg and Mark Williams, and explored new directions in the broad field of the cultural history of travel. The aim of the session was to expand consideration of early modern travellers beyond elite men on ‘Grand Tour’ style trips to include those people who travelled outside such a framework, whose trajectories were far from the voluntary, able-bodied and linear narratives we expect. Discussion focused on the ways in which new research could centre the experiences, encounters and practices of a greater variety of travellers and encourage scholars to explore travel and mobility with richer contextual lenses. The alternative session, ‘Digital Humanities: Practical Approaches and their Application in Humanities scholarship’ led by Edmond Smith, sought to introduce attendees to network analysis and visualisation with innovative mobile voting and practical demonstrations of networks created from early modern archival data. Participants explored the programmes used to create such networks and discussed the ways in which the use of such digital skills might be integral to scholars of the future, with many coming up with innovative uses for such techniques in their own research. Both of these sessions were well received, and their organisers are greatly commended on producing two such informative and engaging panels. Short reports on the sessions by the organisers will be posted on our blog later this week.

After continuing the debates and discussions through lunch, we moved into the third panel: ‘Literary Traces’ with Sarah Knight on Fulke Greville’s Ottoman world in ‘Mustapha’ and the connections between historiography and drama, Ladan Niayesh asking whether the subaltern can speak poetry, illuminating weaving and fabric puns from George Puttenham’s pattern poems, and Edward Holberton on Edward Taylor’s migration from Leicestershire to Massachusetts through his dialogues with George Herbert. Our last panel of the day established the final key concepts: ‘Language and Translation’, with Jane Stevenson on the Latinate culture of Britain and alternate canons, Emilie Murphy on language acquisition in English convents in exile, and John Gallagher on urban multilingualism and London’s stranger churches. The day concluded with a public lecture by Dame Marina Warner, on ‘Dido the Migrant Queen’, delivered to a packed room full of conference attendees and the general public. 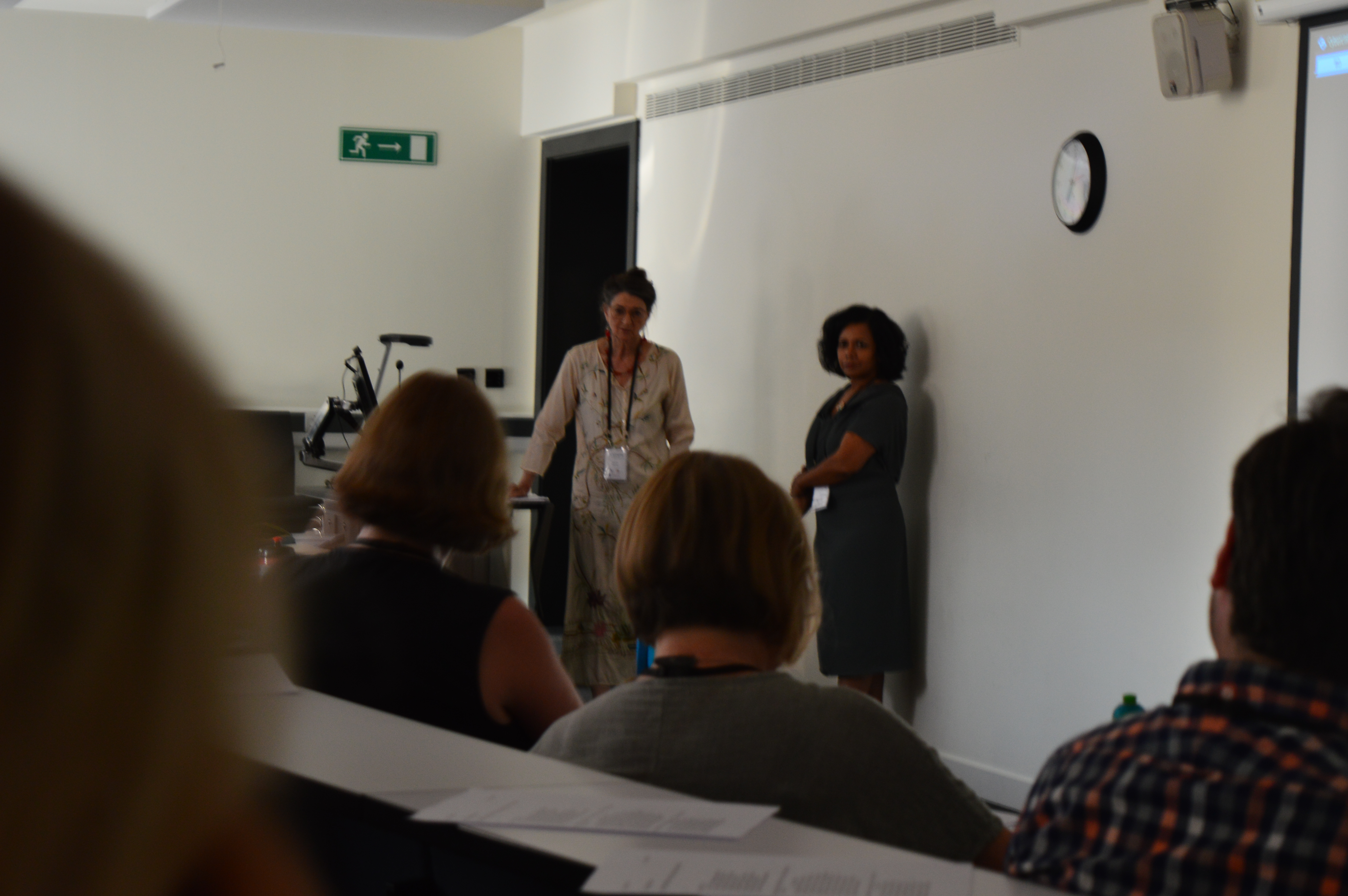 The second day moved to looking at dialogues between transcultural agents and go-betweens, beginning with a panel on ‘Merchants and Sailors’: Claire Jowitt taking early modern ships as transcultural agents, Richard Blakemore on the communal networks of British sailors in Dutch service and Edmond Smith on the ways corporations defined and regulated English identity overseas. The next panel focused on ‘Individual agents’ with Amrita Sen communicating by Skype from India to deliver a paper on the East India Company and women travellers in the sixteenth century, Eva Joanna Holmberg on expressions of grief in Fynes Moryson’s Itinerary, and Natalya Din-Kariuki on the unique epistemological space of travelling preachers such as Edward Terry. We were also fortunate to have Imtiaz Habib deliver his last keynote lecture, a superb meditation on ‘The Unspeakability of Black Belonging,’ exploring the possibilities and challenges of giving voice to non-European historical actors, and asking how best to critically treat a class of historical subjects who inhabit the interstices of transculturality. 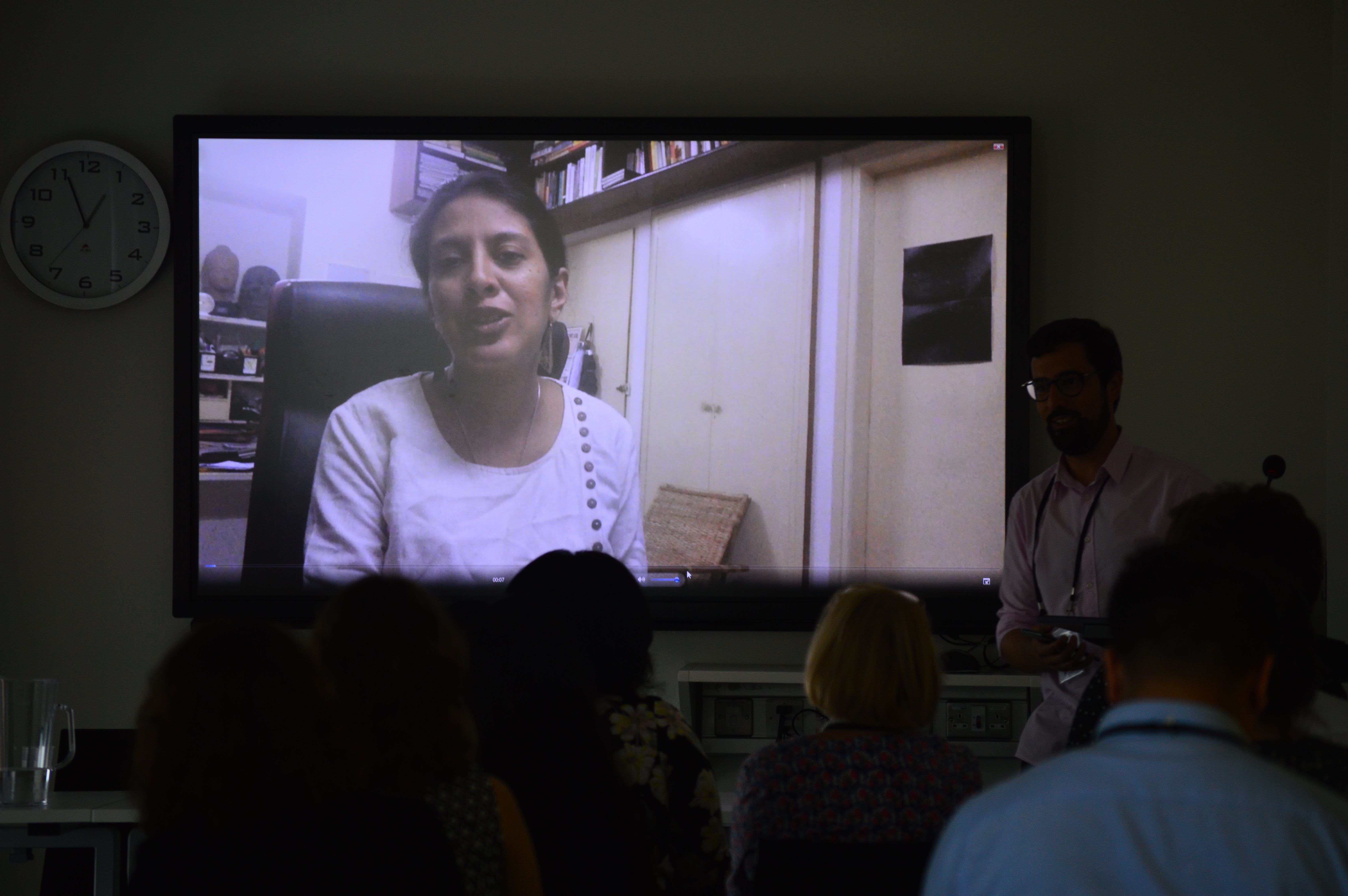 The first afternoon session had a new format – a set of rapid-fire short papers in our Early Career Researchers Showcase. Nailya Shamgunova spoke on the emotional ecologies of early modern England and the Ottoman Empire, Emily Betz on the continental perception of English melancholy, Alison Barker on a travelling Florentine artist’s impact on English devotion through depictions of St George, and Annalise Wolf on chromatics in The Masque of Blackness. Our final panel of the day, ‘Entertainment and Sociability’, swung from Christopher Kissane discussing fish, fasting and foreigners in early modern England, with an abundance of fishy puns, to Angela McShane on the material culture of English drinking rituals.

The final day of the conference focused on imaginative or creative responses to transculturality and new social habits, and began with a panel on ‘Minority Communities’. Gerald Maclean examined British travellers and Kurds in Kurdistan, Ariel Hessayon returned to England for the crypto-Jewish community in Cromwellian England, with particular focus on Antonio Carvajal, and Scott McDermott finished by exploring the community of wandering Jacobites and the ideology of Puritan mobility to, from and within seventeenth century New England. Our final keynote was delivered by Beverly Lemire, looking at the increased presence of non-European slaves and servants and their experiences and effects on domestic intimacy in English households both home and abroad. Next was a panel on ‘Art and Material Culture’, with Karen Hearn looking at the career of Cornelius Johnson, an artist born within the Netherlandish community in London, and Kathrin Wagner taking Wenceslaus Hollar, a Czech etcher who shaped our lasting perception of early modern London. The final panel looked at ‘Cultural Resonances’, with Barbara Ravelhofer examining the luxury debate and court culture on the eve of the civil war and Alana Mailes on the ‘musica transalpina’: the sounds of the English embassy in Venice c.1600-1630. 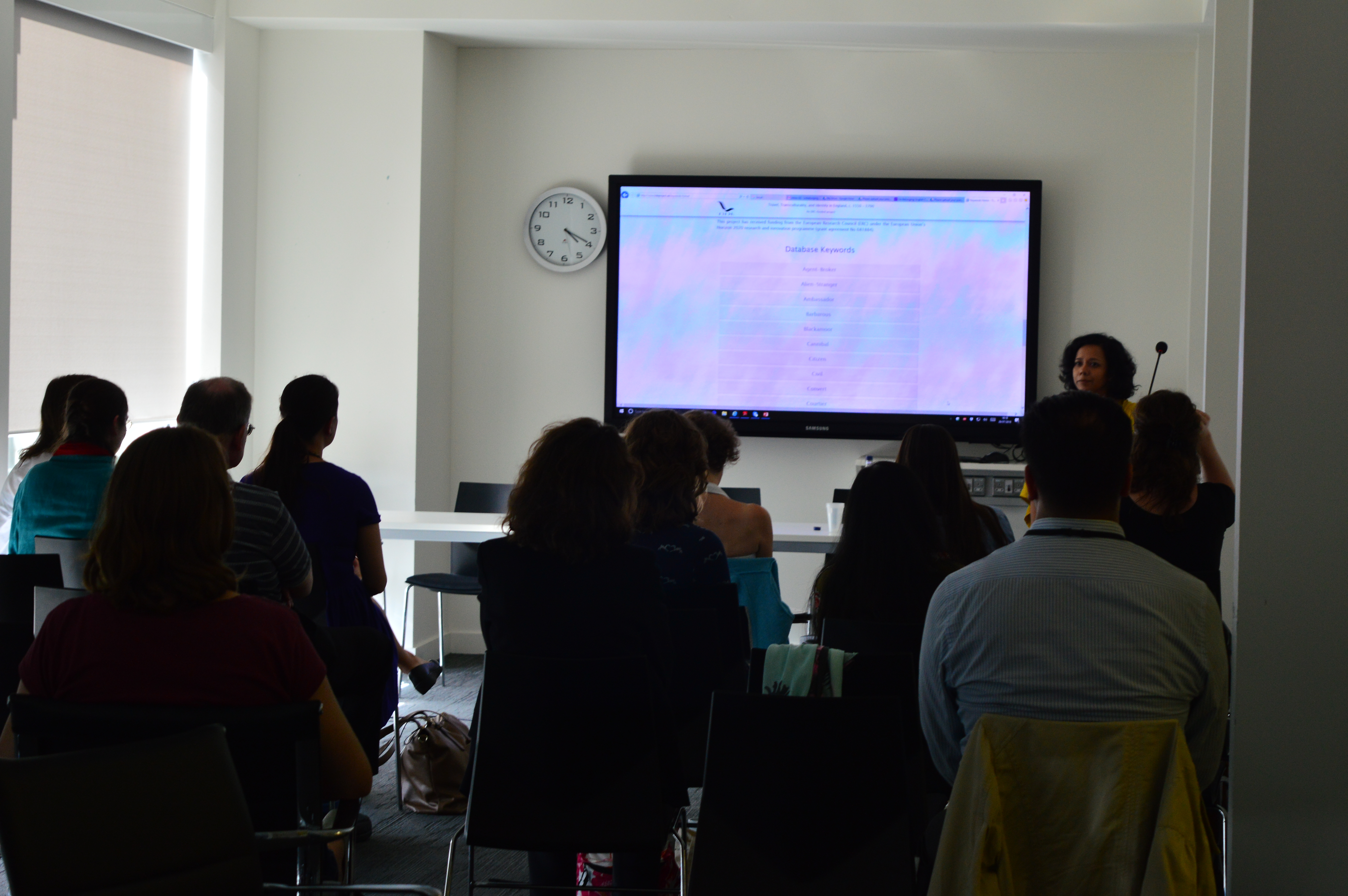 ‘On Belonging’ concluded with the poet Sarah Howe, author of Loop of Jade (2015) and TIDE’s writer-in-residence for 2017/18, presenting her work with TIDE and the World Museum in Liverpool. Howe spoke about the ‘imagination undergirded by research’ that forms the core of her work with the World Museum, and the hope that her work will prompt museum goers to imaginatively respond to the collections through poetry, enacting the same process called for by Shakespeare’s More: imagining the lives of others from a new perspective. Howe read from her poem, ‘(k) Drawn with a very fine camel hair brush’ and encouraged the attendees to write their own responsive poem to a list of prompts. Those poems, as well as live tweeting throughout the conference, can be accessed through the hastag ‘#onbelonging’ on twitter. 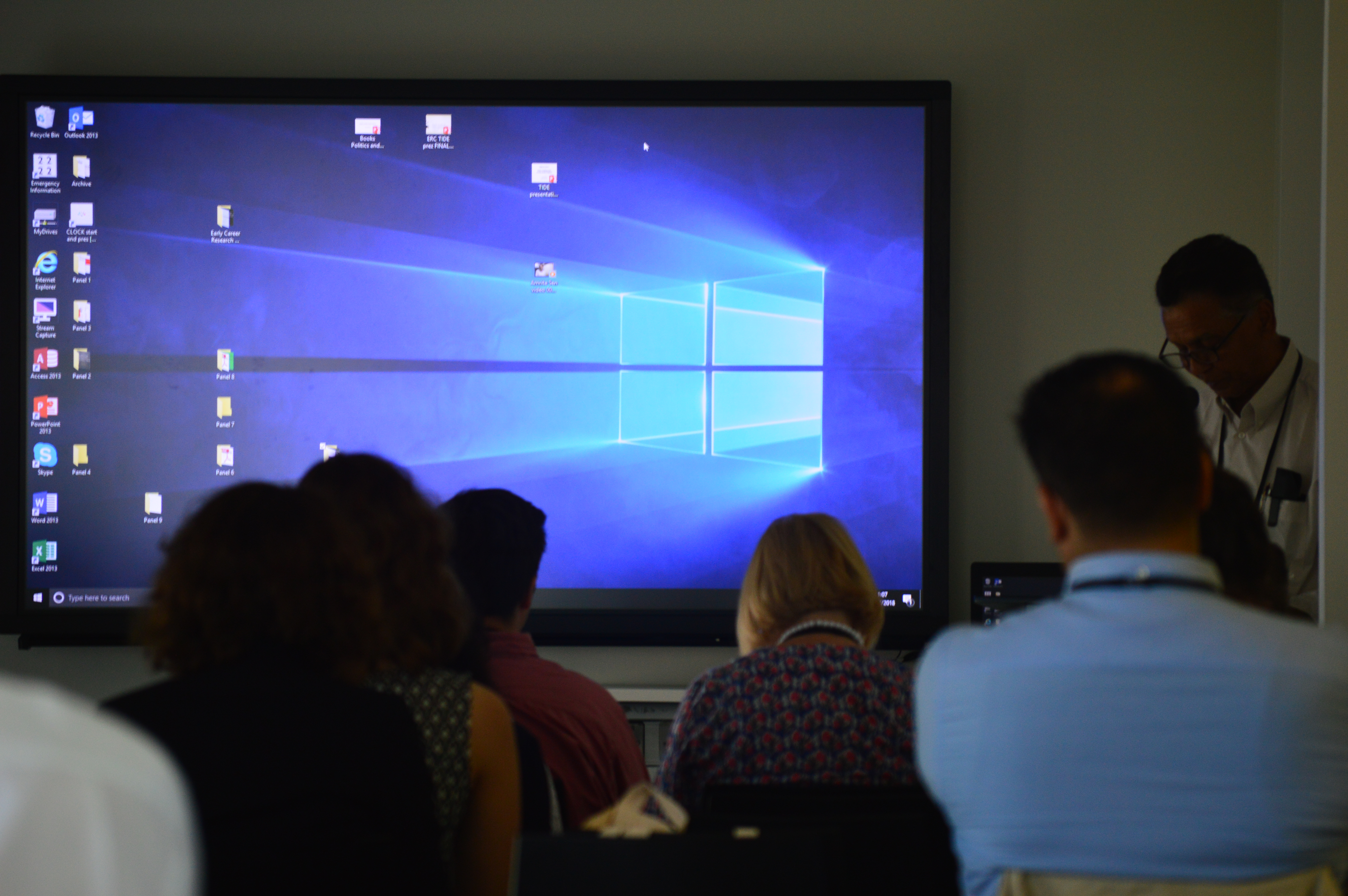 ‘On Belonging’ represents the end of TIDE’s first two years. It is rare for early modern research to feel so topically relevant, and many of the attendees spoke to this theme, acknowledging the modern resonances of their research and its – at times – challenging immediacy. It is our hope that the research emerging from this conference will contribute to public engagement, education and policy initiatives about diversity, as well as shedding light on current debates on human movement. ‘On Belonging’ fostered relationships between scholars, both established and early career, and it is our hope that in connecting scholars from across the globe through a shared interest in examining the voices of people inhabiting transcultural spaces, TIDE will serve to create its own transnational and transcultural community to continue querying the established canon.

Even as this conference report was in the making, news reached us of the sudden death of Imtiaz Habib on 28 August 2018. Imtiaz's plenary lecture at 'On Belonging' was wide-ranging in its scholarship, passionate, and humane, representative of a lifetime of scholarship that had helped to shape the field. He will be deeply missed. This report is dedicated to his memory, but we want to end this post with his own words, poignant and hopeful, written shortly before his death, to an email group of scholars on the subject of early modern race studies:

As I sit here in my hotel room in London waiting to fly back home to the U.S. (a home taken over by thugs at the moment), reading this exciting conversation (appropriately, after an early modern “Belonging” conference!) engulfs me in bittersweet feelings—bitter because this comes so late, in the approaching sunset of my life, sweet because of the satisfaction it conveys of the fruition of worlds and bodies of knowledge that we have struggled so long and so hard to bring about. Yet, as I muse over the happy portends that the subject of this conversation holds I am also confronted by anxieties.

On the one hand, do we want the journal to fence off our e.m. scholarship into a protected enclave where we happily talk to ourselves, busily citing each other? [...] On the other hand, should we live amongst other discursive neighborhoods [...], where lurks the danger over time of the whitening out of the urgent particularity of our conversation[...]?

The answer, my own clumsy thoughts hint, is to achieve a border condition, a vibrantly mixed early modern dockside area, where discursive sailors from many ideological ports disembark (or should I say unload?) but all are absorbed into a stateless zone that is more many hued than single colored, and which gradually percolates into the towns and lands beyond. [...] This will take careful management and (I hesitate to say this, for want of a more elegant phrase) gentle intellectual guidance, whose integrity will be difficult to maintain in subsequent decades. That guidance will also have to be in terms of steering participants towards analytical rather than emotional output, an easy enough drift to be caught in.

So, a brave new world indeed, but exhilarating nonetheless.