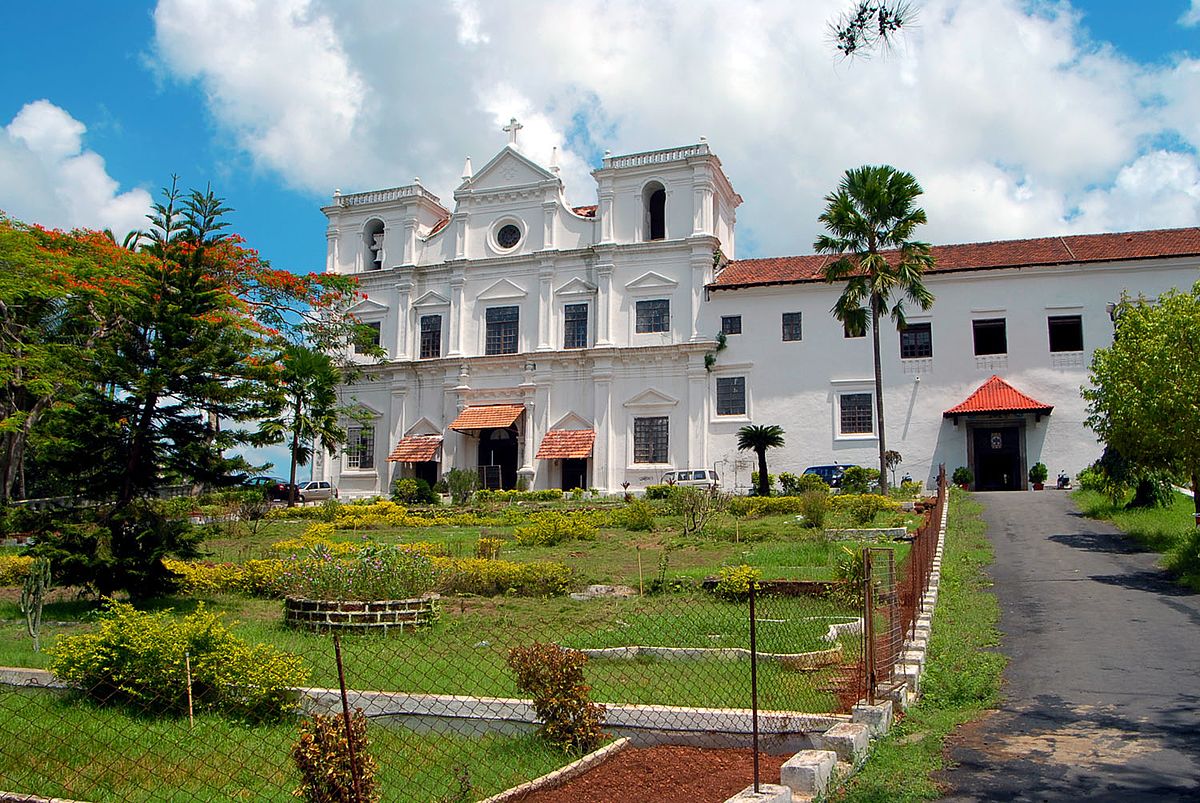 Façade of the Rachol Seminary where Thomas Stephens served as a rector.

Here is a sneak peek into what we're working on, following the launch of our open access TIDE: Keywords - a set of case-studies on border-crossers in and out of England, due out next year, also as an open access publication. Read on to find out more about Thomas Stephens: English exile, Jesuit priest, Marathi poet.

On 4 April 1579, Thomas Stephens, an Englishman from Bushton, Wiltshire, embarked on a ship of the Carreira da Índia, the maritime route between Lisbon and Goa. Stephens was one of five Jesuits who sailed from Genoa to Lisbon to serve in the Jesuit missions in Asia. After a long voyage which took about seven months, the English missionary arrived in Goa on 24 October 1579. The capital of the Portuguese Estado da Índia was facing profound changes. In the early days of Portuguese presence in Goa, Afonso de Albuquerque had initiated to incorporate the local populations into the colonial apparatus by various means, like through a policy which included the promotion of mixed marriages between Portuguese men and local women of Brahman origin or of light colour converted to Christianity; the recruitment of Hindu experts and Christianised Brahmins to relevant posts in the colonial administration; and the adoption of local symbols of social and political prestige such as the palanquin and state elephants.  But the death of Sebastian I of Portugal posed serious doubts about the future of the Portuguese crown and its empire, and the adoption of the directives of the Council of Trent by the Portuguese Crown led to a series of administrative reforms implemented by João III. Inspired by the Spanish experiences in Mexico and Peru, he sought to affirm the Crown’s authority in Portuguese colonial possessions such as Goa, by homogenising Goan society according to the Tridentine model. The ultimate aim was gradually to eradicate all non-Christian elements in Goan society.

Between the 1540s and the 1550s, the Portuguese authorities promoted the destruction of temples and mosques. The land revenues of the Hindu temples were transferred to the Catholic Church. In 1567, the establishment of the Goan Inquisition and the edicts issued by the first Provincial Council of Goa confirmed the end of Albuquerque’s more tolerant policies. The aggressive policies towards the conversion of non-Christians often led to violent conflicts between the Portuguese authorities and the Hindu and Muslim communities, especially in the hinterlands of Goa, where the proximity to territories ruled by Hindu and Muslim potentates stimulated the resistance of the local populations. There were also growing tensions between the Portuguese born in Portugal, and those who were born in India, or descended from the offspring of the mixed-marriages promoted by Afonso de Albuquerque in the 1510s. Those who had converted to Catholicism were becoming increasingly frustrated with the social and political privileges enjoyed by white Portuguese born in Europe.

It was in this fraught climate of racial, political, and religious tension that Thomas Stephens arrived, and after a few years at the College of St. Paul, in 1583, he was sent to the Salsete mission, one of the most difficult mission fields of the Jesuits in the Estado da Índia. Salsete was one of the provinces most affected by the destruction of temples and mosques promoted by the Portuguese authorities. It was also one of the preferred targets of the raids made by the troops of the Sultan of Bijapur, which often received the open support of members of the local Hindu and Muslim communities. Immediately after Stephens’ arrival in Salsete, a group of Jesuit missionaries was killed by a Hindu uprising in the village of Cuncolim. Stephens was deeply affected by the massacre. In one letter to his brother, Richard Stephens, he presents Salsete as a land inhabited by ‘a handful of Christians’ surrounded by ‘pagans’ described as ‘of a warlike character‘ and who were  ‘doing great harm to the Christian republic, partly by their open attacks and partly by their conspiracies’. 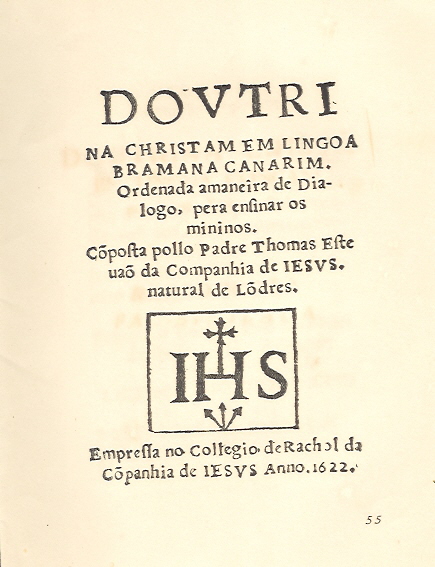 Frontispiece of the Doutrina Christam em Lingoa Bramana Canarim, the cathecism used by Thomas Stephens. This work was published in Rachol in 1622.

The 1583 massacre exposed the failure and limitations of the uniformising policies of the Estado da Índia in Salsete. After an initial moment of increasing repression in the region instigated by the Portuguese authorities, the Jesuits implemented a new strategy which sought to manipulate local cultural elements to ensure the conversion of the populations of Salsete. Stephens was one of the instigators of this strategy. The few surviving letters written by him reveal a special concern in promoting the use of local languages in the literature and religious ceremonies of the Salsete Catholics. In one letter to Claudio Acquaviva, the General of the Society of Jesus, Stephens stressed that the ‘best remedy’ for Salsete was to ensure ‘that everyone posted in the parishes should learn the language’.

Stephens was particularly interested in creating ‘a catechism [doutrina] written in the local language from which the children learn by heart’. This catechism, which was probably one of the inspirations of the Kristapurana, was highly appreciated by both missionaries and converts, especially children. As he told Acquaviva, the success of the catechism was usually seen ‘during confessions, [when] one realises that the little knowledge they have from this catechism is very fruitful’.  These encouraging results of the experiments with the ‘catechism’ led Stephens in 1608 to ask Acquaviva to give permission and financial support to publish his works in Marathi and Konkani. The approval of the General of the Society of Jesus was absolutely necessary to validate a work which, by being written in a largely unknown non-European language, could pose the risk of suggesting an erroneous terminology for the doctrinal principles of the Catholic Church, but Stephens was also concerned about the expense that would be necessary to print his works in Marathi, as it would mean actually casting new metal type for the characters. As he explained to Acquaviva, ‘it seemed impossible to make enough matrixes for six-hundred characters which are mostly syllables and not letters, as our 24 in Europe’.   In 1616, the Kristapurana was finally printed, although in Roman characters, since the Mission declined to fund the making of typeface in the Indian, Devnagri script traditionally used for Marathi.

Stephens’ work meant to contribute both to the conversion of the heathen populations as well as to the intellectual preparation of the Jesuit missionaries. It was work designed to transmit Catholic doctrine in a way that fitted into the literary traditions of the cultural world of Salsette and address individuals to whom Christianity was a total novelty. The Kristapurana was thus the result of a prolonged dialogue between Stephens and the local populations.  The cultural differences that separated a missionary like Thomas Stephens and the Salsete converts led both to seek creative ways to integrate local elements that did not clashed with Catholic doctrine and practices.

The accommodationist creativity behind the production Kristapurana is also deeply related to the biography of his author. Thomas Stephens adopted a Portuguese version of his name – Tomás Estevão, and sometimes Tomás Esteves – a decision that helped his daily life, as well as it suggest a willingness to demonstrate his loyalty to the Portuguese Crown. Thomas Stephens not only became Tomás Estevão, as most of his correspondence was written in Portuguese, although he could write in Latin and Italian, two languages commonly used by Jesuits from outside Iberia and Italy. In his letters, Stephens often chose terms used by Portuguese nationals in colonial territories to refer their country and monarch such as reino (realm) or el-rei (His Majesty). The adoption of a Portuguese version of his name could be interpreted as a pragmatic decision to facilitate his daily life (many foreigners usually did the same in Iberia) or as a symbolic demonstration of loyalty to the Portuguese Crown, but it was also a gesture that suggest both an ‘accomodationist’ approach and an intention to develop a persona based on ‘inbetweeness’.

Historical evidence, however, suggests that Stephens often used his ‘inbetweeness’ to serve as a mediator between the Portuguese authorities and the English. In 1583, a group of four Englishmen - Ralph Fitch, John Newberry, William Leeds and John Storey – were arrested at the Portuguese port of Hormuz and sent to Goa. Stephens and a Flemish Jesuit, Marcos Maecht, sought to mediate their release with the Portuguese viceroy. In spite of their sudden escape, Ralph Fitch mentioned in a letter written from Goa in 1584 that if Stephens and Maecth ‘had not stuck to us, if we had escaped with our lives yet we had a long imprisonment’.  The Dutch traveler, Jan Huyghen van Linschoten, who was at the time in Goa, had a different opinion and believed that the Stephens’ and Maecht’s mediation was nothing more than (for Linschoten) a typically devious Jesuit scheme to gain money from the Englishmen.

If Linschoten had doubts about the real intentions of Stephens, depicting him as a Jesuit schemer who was ready to explore his countrymen, the Portuguese authorities also resented his readiness to help foreigners from hostile countries. After Stephens’ death, Viceroy Fernão de Albuquerque evoked the experiences of the English Jesuit in a letter to Philip II of Portugal (III of Spain), where he recommended that the Crown should ban the presence of foreigners in the Estado da Índia, mentioning Thomas Stephens, ‘an English clergyman of great sanctity’, who one hour before he passed away, ‘said that the Portuguese were too lenient for allowing foreigners in this State’.  Fernão de Albuquerque’s anecdote about Thomas Stephens appeared to suggest that the English Jesuit was repented for his role as a mediator between the Portuguese authorities and foreigners from enemy countries, and for his role in facilitating that non-Portuguese influx, perhaps even  for the inclusion of the letter he wrote to his father, which was widely circulated in England through its inclusion in Richard Hakluyt’s monumental collection of early English travel accounts, The Principal Navigations, Voyages, Traffiques and Discoueries of the English Nation (1599-1600). This supposed regret was used by the viceroy to suggest that even foreigners who were loyal to the Portuguese, like Thomas Stephens, could not be fully trusted because they were unable to control the actions of their interlocutors in other countries.