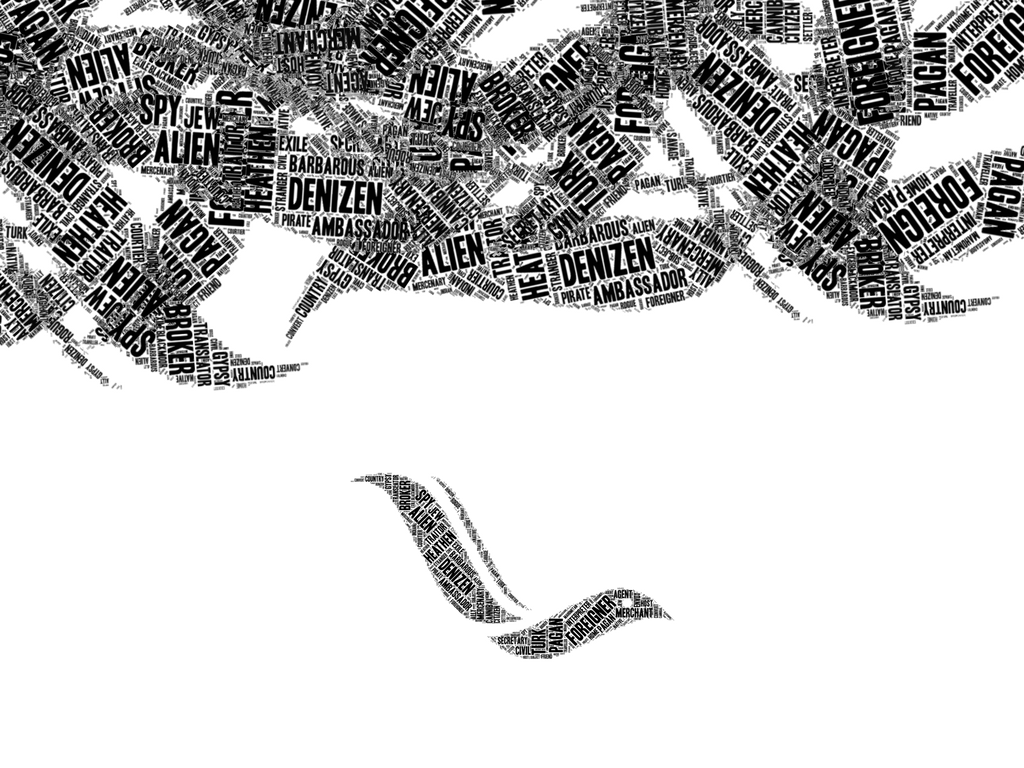 What did it mean to be a stranger in sixteenth and seventeenth century England? How were other nations, cultures, and religions perceived? And what happened when individuals moved between languages, countries, religions, and spaces? TIDE: Keywords emerges from the collaborative work of ‘Travel, Transculturality, and Identity in England, c. 1550-1700’ (TIDE), a five-year interdisciplinary project funded by the European Research Council, exploring the development of the ideas of belonging and betweenness in early modern England. It was evident from the outset that not only did certain terms recur in different discourses, but they repeatedly illuminate points of tension, debate, and change. Tracing such terms is challenging, precisely because of the shifting and ambiguous nature of the descriptors. Lived experience in England and particularly in London was complex enough due to the sheer range of its populace. John Eliot’s French-English manual, the Ortho-epia Gallica (1593) illustrates the multicultural, multilingual space in one of its model dialogues:

‘Where shall I find you about twelve a clocke?’ ‘I will be below in the Change, either walking among the Italians, or truking with the French, or pratling amongst our English, or carousing with the Flemings at the Cardinal’s Hat.’(1)

Terminology for describing this multitude created new complications. In London, for instance, the term ‘foreigner’ was usually used legally to denote someone from another city: by that definition, playwrights such as Christopher Marlowe (born in Canterbury) and William Shakespeare (born in Stratford-upon-Avon) were both ‘foreigners’ in London. This was not simply a matter of civic law, but had economic implications as well. English law and taxation practices denoted travellers from other nations as ‘strangers’ and ‘aliens’, but those of that group who permanently settled in the city and negotiated rights to escape alien custom duties and taxes (‘denizens’), for instance, were habitually distinguished both from people born in London (‘free denizens’), as well as from others of their own nations simply passing through – merchants, casual travellers, scholars, or diplomats and their retinue. Bringing in questions of nationhood, race and ethnicity further complicates the issue: the definition and status of ‘stranger-born’ subjects and ‘English-born strangers,’ as recent scholarship has shown, was hardly consistent even within the period in question.

There is an established scholarly tradition emphasising English xenophobia and anxiety about immigrant communities – from the French and the Dutch, to the Jews and Africans or ‘Moors’ – taking up state and national resources that rightfully belonged to the ‘native-born’ English. Increasingly, though, new research has demanded a reassessment of such preconceptions, revealing the multiple ways in which conflicting affiliations (e.g. based on shared faith or shared craft), or practical conditions of living and work in close proximity, could complicate easy binaries of differentiation. Focussing on those figures who operated beyond settled communities and groups, the definition and status of diplomats, exiles, and converts, and those who defined themselves explicitly beyond the legal boundaries, such as pirates and mercenaries, was equally ambiguous. In early modern thinking about diplomacy, a fine distinction, for example, applied to the remit of ambassadors appointed by the monarch, and those appointed by the state but funded by the trading companies, as in the case of William Harborne, the English ambassador to the Ottoman Empire, in the pay of the Levant Company. Affiliations to company and state, in such cases, meant a careful balance had to be wrought in any act of mediation. How did such balancing of multiple claims help to re-draw boundaries and re-define definitions?

Complexity lies also in the way concepts and ideas travelled from the Continent to England, and across discursive fields within England. One instance at least provides a telling illustration of how concepts of difference in religious discourse could shape economic and political decision-making, when the argument that justified the English state’s authorisation of the activities of the Virginia Company in America was based on Sir Edward Coke’s uncompromising claim that all non-Christian infidels were aliens, perpetui enemici, ‘perpetual enemies’, with whom no accommodation was possible, ‘for between them, as with devils, whose subjects they be, and the Christians, there is perpetual hostility, and can be no peace.’(2) How did the transfer of concepts from other countries and other discursive fields produce conflict as well as consensus?

In examining these issues, TIDE: Keywords follows the model of Raymond Williams’s Keywords: A Vocabulary of Culture and Society (1976). In his introduction to the first edition of his Keywords, Williams argued that the meanings of certain crucial, recurrently used words were ‘inextricably bound up with the problems [they] were being used to discuss’.(3) His twofold definition of such keywords as ‘significant, binding words in certain activities and their interpretation’ and ‘significant, indicative words in certain forms of thought’ (p. 15) continues to be a useful one to interrogate words that sometimes tend to be under-analysed in both popular and critical discourse. They help to illuminate what Williams had described as ‘a history and complexity of meanings; conscious changes, or consciously different uses; innovation, obsolescence, specialization, extension, overlap, transfer; or changes which are masked by a nominal continuity so that words which seem to have been there for centuries, with continuous general meanings, have come in fact to express radically different or radically variable, yet sometimes hardly noticed, meanings and implications of meaning’ (p. 17).

The selection of words examined in TIDE: Keywords all reveal similarly complex histories of usage; in many cases, the concepts, preconceptions, and debates that they embody (or subsume) came to play seminal roles in articulations of identity, rights, and power in subsequent periods. Our aim is not to settle on a single definitive description, but to illuminate precisely the complexity – and often, the multiplicity – inherent in the usage of these terms in early modern English. Each essay and citation of usage offered here emphasises the fact that the terms in question share a certain slipperiness, that they are altered, revised and transformed repeatedly by multiple imperatives. TIDE: Keywords will continue to be a work in progress throughout the duration of the project, with new examples and interrogations added as fresh material emerges through our collective research. We are grateful to scholars who have provided advice during the course of its preparation. We welcome comments, usage contributions, and reflections on the keywords covered here; please feel free to contact us at erc.tide@liverpool.ac.uk.

TIDE: Keywords is available for use and circulation under a Creative Commons licence (CC BY-NC-ND 4.0). You are free to reuse this material without modification for non-commercial purposes. Please see the Creative Commons website for full licence terms. Please include appropriate attribution on any page which links to or embeds material from TIDE: Keywords. Although this is not a requirement of the licence, we would be grateful if you could send us an email at erc.tide@liverpool.ac.uk to let us know of any such re-use.