Skip to content
To the TIDE Blog...
First Steps into the In-Between

When most people think of the great age of travel and discovery in the sixteenth and seventeenth centuries, they think of great ships, of voyages and new worlds. They think of intrepid adventurers going out to discover new countries and new peoples, of colonisers laying claim on places whose very existence had been unknown to Europe before their arrival. But that’s only part of the story. 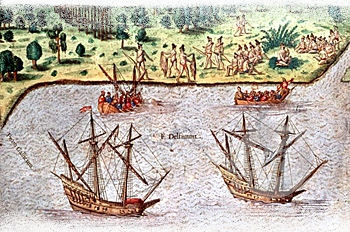 The great age of travel and discovery was also a period when cross-cultural encounters led to radical developments in the way we think about human identity. Human movements across borders increased under the combined impact of multiple political, economic, religious and social factors throughout this period. And as they did, the ways in which we think about difference – between countries, between races, between one human being from this part of the world and one from another – developed rapidly as well, and began to take recognisable shapes and forms.

This is an active, rapidly growing field of scholarship. We are increasingly, and perhaps unsurprisingly, attending to the impact of such cross-cultural encounters from a number of disciplinary perspectives. However, in a field that tends to be framed predominantly in terms of cultural clash and boundaries, there is both room and a need to explore a different story: the story of transculturality and betweenness. In a period marked by mobility, what did it mean to belong, or not to belong? What did it mean to move between cultures, countries, languages, faiths? How did you see yourself, and how did others see you, when you did so? Were assimilation and segregation the only two options available? Could one not be both this and that, a third thing, both part of the world one had left and the world one occupied? These questions seemed urgent enough when the idea of TIDE was formulated a few years ago, but against the backdrop of the unprecedented scale of crisis and anxiety about human mobility and migration that has unfolded since then, they seem even more important to ask, and to understand today.

In sixteenth century England, such questions brought up some of the earliest debates about nationhood, birth-right, about the impact of such human movements – be it willing or forced – on economic stability. Elizabeth I’s repeated licenses granted in the 1590s to the merchant Casper van Senden to deport black strangers brought over to England strike a strangely familiar note. They are ‘to the great annoyance of her own liege people,’ she writes, who ‘co[vet] the relief which these people consume’. English social history is full of that invisible black presence which has only recently begun to be excavated.

Elsewhere, English movements abroad also brought up issues about identity, contending loyalties, and the fraught boundaries between religious and national affiliations. When an Englishman changed his faith, was he still an Englishman? In the summer of 1586, the first English ambassador to the great Ottoman empire, William Harborne, wrote a letter pleading for the release of some English sailors taken prisoner by the Ottomans. His letter is addressed to ‘Assan Aga, Eunuch & Treasurer to Hassan Bassa king of Alger, which Assan Aga was the sonne of Fran. Rowlie of Bristow merchant, taken in the Swalow’. Suddenly, what seems to be international diplomatic correspondence becomes a letter from a Norfolk-man to the lost son of a Bristol merchant, exhorting him to be ‘another Joseph’ and do his utmost to help the English cause.

At home, literature provided a means through which such questions and anxieties could be probed, tested, and pushed to their limits. What does it mean when Shakespeare has his Moorish convert Othello say at the end of his play:

Set you down this And say besides, that in Aleppo once, Where a malignant and a turban’d Turk Beat a Venetian and traduced the state, I took by the throat the circumcised dog, And smote him, thus.

The incident in Aleppo involved a Muslim Turk who attacked a Christian Venetian. Othello says that he then smote that “circumcised dog” for hitting a Christian – so is he now, as he stabs himself, seeing himself as the Christian protector of Venetian honour, or the “malignant [...] Turk” who had raised his arms against Venetian honour and was therefore punished? What does our interpretation, and our affective response to Othello at this moment say about us?

And as both the playwright and his audience would have known, it did not require a different skin colour, or language, to make a ‘stranger’ of a human being. Shakespeare himself was legally a ‘stranger’ in the city of London – as would have been a good cross-section of his audience – economic migrants from other parts of England, whose collective presence made London the metropolis it was to become.

Over the next five years, I hope that TIDE’s investigation will help us to break new ground in understanding cross-cultural encounter from the perspective of its most involved agents: what it meant to be an alien, a foreigner, a stranger; how these terms – so supremely value-laden today – evolved; and how institutions of law, religion, society, and economy, and the human imagination through art and literature dealt with such figures. The outlines etched by that macroscopic enquiry will be filled in by our excavation of the trajectories of individual figures, by the illumination of the lived worlds of the people whom such terms attempted to encapsulate. And because such issues remain as potent and alive today, we will work closely with poets, novelists and artists who will help us to look at this material with fresh eyes. Even as our academic work attempts to rethink our current understanding of cultural differentiation and assimilation in this defining period, the writers’ meditations on the project’s themes, and imaginative responses to the project’s findings will provide a lasting legacy – an imaginative resource for the border-crossings of the future.