Skip to content
To the TIDE Blog...
Striking up a conversation: A Christmas Encounter at the British Library 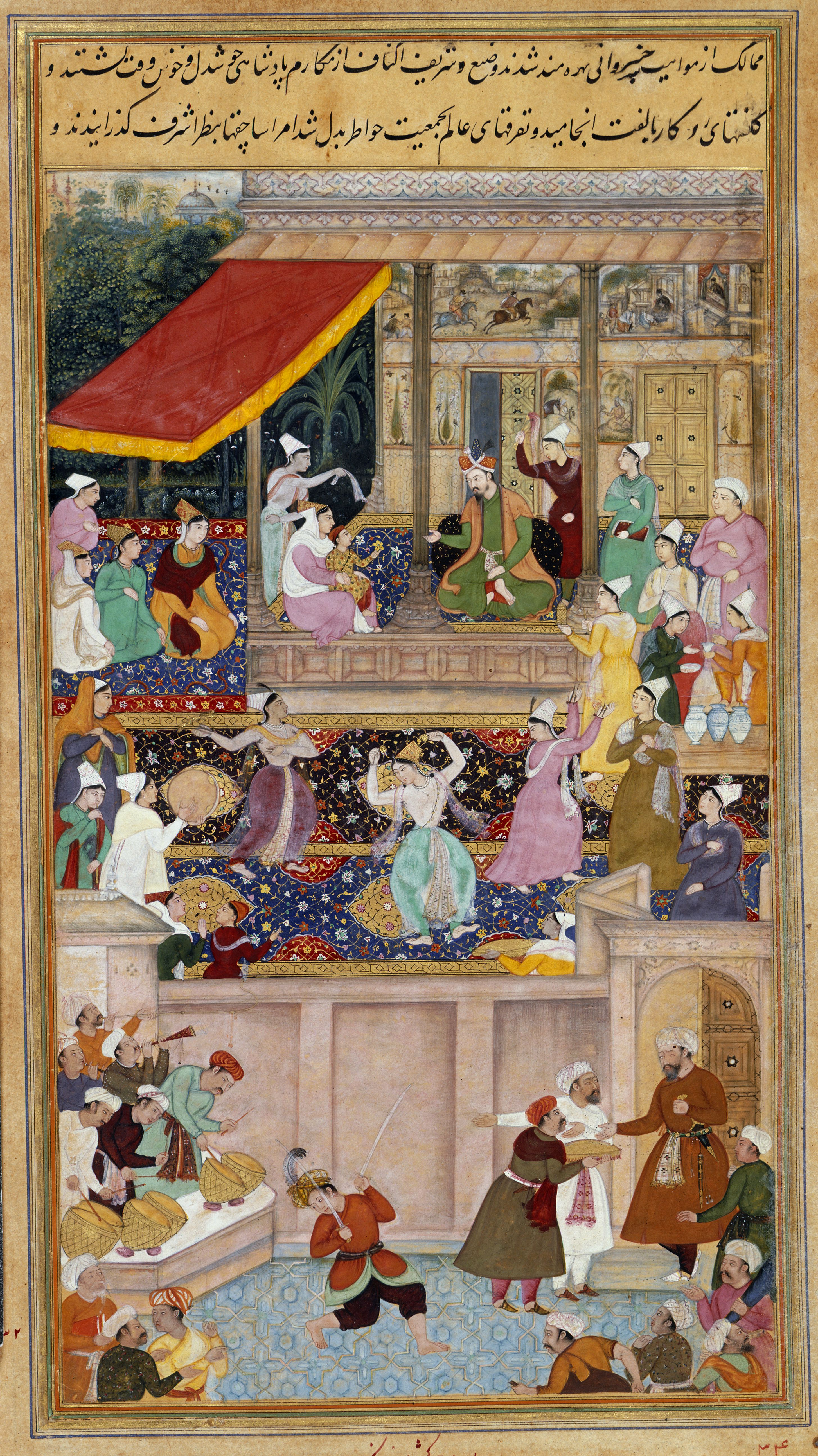 A small boy sits in his mother’s lap. Around them is a scene of great rejoicing. Music plays, people holding gifts and wearing turbans look on in adoration. But at the centre, the child and his parents gaze at each other with single-minded focus: for them, nothing else exists. The parents have wandered long as exiles, dependent on the charity of others, but now a great moment of change is finally upon them. The boy’s father looks deceptively calm, but he points his hand towards the child, as if to say – look, here he is – the boy who will be the shelter and refuge of the whole world.

The setting may sound terribly familiar when I put it this way. Not all is as it seems, though, because the actual painting that I am describing is very far from the image that a description like this is bound to evoke in this season. There are no stars here, no shepherds, and certainly no farm animals. Instead, there is the glint of the two swords that the juggler in center foreground holds in his hands. A group of musicians to our left play kettledrums and bugles. In the middle distance, there are dancing girls. The child and his parents sit in a rich pavilion of scarlet and gold.

But if you squint and peer beyond them in this small painting, which can be seen on the British Library’s superb digitised manuscripts site, on the walls of that pavilion you’ll see yet more paintings – tiny murals. In the first of these, there are men on horseback in a more familiar countryside setting. In the next panel, the three men have dismounted, they now kneel in front of what looks like a tiny figure with a child on her lap. That, now, looks like the familiar Adoration of the Magi. But what it is doing here takes us back to a moment when two very different worlds came together more than 400 years ago.

Jalal-ud-Din Akbar, Jahanpanah (‘Shelter of the World’), Shahanshah (‘King of Kings’), the third and perhaps greatest ruler of the sprawling empire that dominated the subcontinent from the sixteenth century till the 1850s, commissioned this book, the Akbarnama, in the late 1590s, and the manuscript in question was probably prepared around 1602-03. One of its most striking early stories tells us how Akbar, separated as a baby from his parents when his father Humayun had been exiled from India, was reunited with them at the age of three. The painting I described accompanies that story, showing the moment when, in a test devised by his father, Akbar demonstrated his ‘divine light’ by recognising his mother in a crowd of women after the long separation – and rushed unhesitatingly into her waiting arms.

The scene in the mural behind the mother and child might be a tacit acknowledgement of the shared elements between Islam and Christianity, but to leave it at that would only be half the story. Akbar’s curiosity about other cultures and religions was well-known. He commissioned translations from Sanskrit and other languages into Persian, the official language of the Mughal empire, and experimented with the idea of a syncretic religion. One of his radical ideas was the establishment of a debating hall, the Ibadat-khana, where intellectuals of all faiths came to discuss matters of philosophy and religion. It is here, in 1580, that some new guests arrived, like a very different journey of the magi – three Jesuit fathers whom Akbar had invited from the newly established Portuguese settlement in Goa. The Jesuits knew Akbar’s reputation as a great connoisseur, so instead of trivial gifts, they brought books and paintings – Albrecht Durer’s ‘Virgin and Child’ was among them, and a copy of a multi-volume illustrated Bible. They celebrated Christmas in Akbar’s presence, and displayed a crib decorated with religious paintings. In the extreme right-hand corner of those tiny inset wall-murals in the Mughal painting of Akbar’s childhood, you can see a figure, dark-robed like a Jesuit priest, looking on.

The Jesuits were of course keen to convert the Mughal emperor, but despite their hopes and hours of conversation, that did not happen. What did occur, however, was much more interesting. At the studios of the Mughal court, Hindu and Muslim artists pored over accumulating examples of ‘exotic’ European images and techniques. The result is a breath-taking fusion of cultures. Among the albums of paintings produced at successive Mughal courts, therefore, we find exquisite pieces that range from copies of Durer’s engravings and Michelangelo’s Noah from the Sistine Chapel, to European elements seamlessly absorbed into Mughal matter – angels and haloes, cherubs with wings, flowers, gowns, European-style cross-framed chairs.

And then, of course, there are paintings like this one, where the conversation among cultures almost goes unnoticed. Between the child and mother in the foreground, and the pair we can only just make out in the background, there is a world of difference. Yet there is acknowledgement of an innate human connection as well, an acknowledgement of displacement and exile, of losing homes and coming home. This painting, now digitised like many items in the British Library’s collection of Indian art and manuscripts, is evidence of the extraordinary creativity of the court with which Europe, and especially the British, would have a close but tumultuous history of interaction in centuries to come. But more importantly, it is evidence of a kind of curiosity – of the ability to ask, to listen, to enter into a conversation and to draw connections rather than boundaries – that no written record can convey.