Skip to content
To the TIDE Blog...
TIDE Seminar – Turks and Mahometans: Presence and Perception in Early Modern England 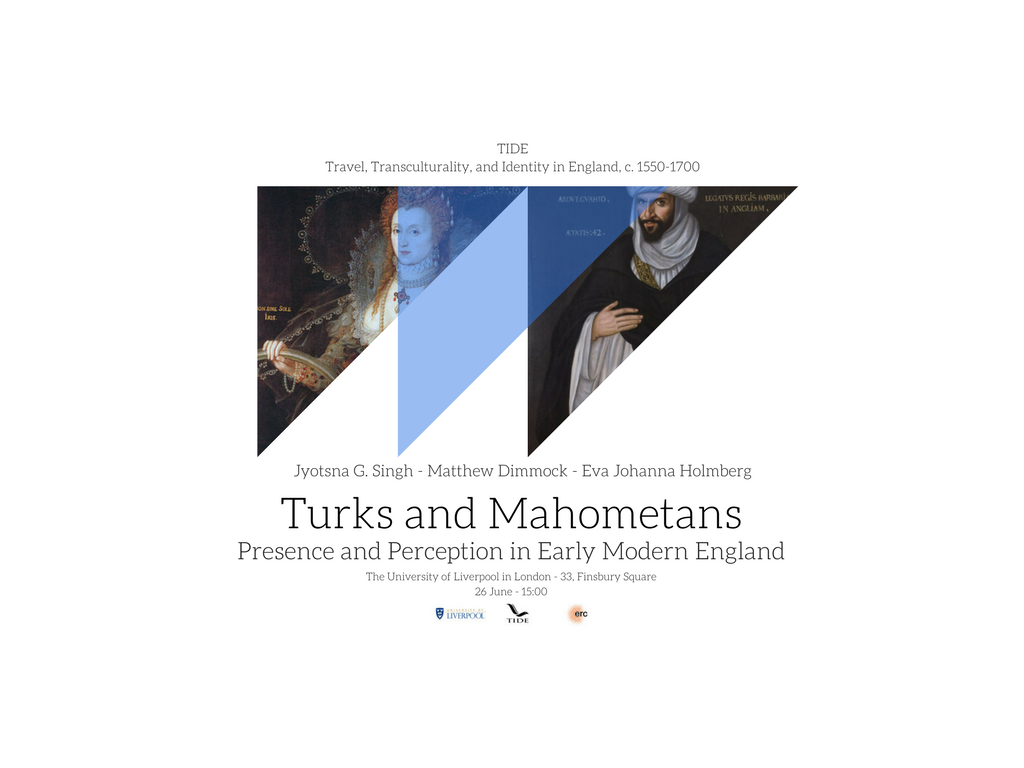 Jyotsna G. Singh’s paper, ‘English Encounters with Islam in Mughal India’, explored the perceptions of Islam and Mughal sociability in the accounts written by Sir Thomas Roe and Edward Terry during the reign of Emperor Jahangir (1605-1627). The self-entitled ‘Conqueror of the World’ ruled over a period of prosperity and cultural dynamism. As the ruler of an ethnically and religiously diverse empire, Jahangir continued the policy of religious tolerance adopted by his father, Akbar, which instigated a series of debates between different Islamic orthodox and heterodox factions. Islam and the thriving Indo-Persian culture of Jahangir’s court were, however, marginal topics in the first English accounts of Mughal India. Although the chaplain of Roe’s embassy, Edward Terry rarely analysed the Islamic movements or the theological debates that agitated the Timurid court, and his account is more concerned with ethnographic observations that could be relevant to the practical interests of the East India Company. Although not interested in the religious life of the empire, Roe was rather interest in Mughal practices of sociability. His regular contacts with relevant courtiers and officials were reflected in several passages where he described court rituals and the hospitality he received from Mughal grandees. Indeed, throughout his account of the hospitality offered by Jamaluddin Hussain, the governor of Bengal, Roe presents an image of Muslim civility and society that contrasted to the negative perceptions of Islamic peoples that circulated in early modern Europe.

On ‘Mahomentans invoking Mahometanism in Early Modern England’, Matthew Dimmock explored the experiences of Muslims based in England during the Elizabethan period. Early modern English works on Turks and Mahometans often reflected several tensions between the polemicist literature which depicted Islam as an erroneous belief, the emergence of England as a leading Protestant power against Catholic Europe, and the importance of expanding English trade to Islamic regions. The shared geopolitical interests between England and powers such as Morocco or the Ottoman Empire often influenced more or less positive views of Muslim peoples which, albeit refuting the supposed errors of Islam, highlighted the opposition of Turks, Moors and other Mahometans against the Catholic rivals of England – Spain, Portugal and France. An example of this perception is the sermon read in 1586 by Meredith Hanmer to celebrate the conversion of Chinano, a Muslim Ottoman born in Greece who was among a group of Turks enslaved by the Spanish that were captured by Sir Francis Drake in the West Indies. Unlike his companions, who returned to the Ottoman Empire, Chinano remained in England. Hanmer celebrated Chinano’s decision as both a triumph of Protestant Christianity over Islam and an English victory over Spain, but his The Baptizing of a Turke is particularly interesting for devoting several pages to the life of Muhammad in which Hanmer refutes the Prophet and the Alcoran, suggesting at the same time that Islam and Catholicism were two variants of an erroneous monotheistic belief based on idolatry. Hanmer’s diatribes against Muhammad suggested that ‘Mahometanism’ could be a stepping-stone to true Christianity, but they also served as pretext to use the conversion of Chinano as an allegory for the triumph of English imperial ambitions and Protestantism over Spain and the Catholic Church.

Eva Johanna Holmberg examined the English perceptions of non-Muslim communities in the Levant. Her paper, entitled ‘Slaves of the Sultan: Perceiving the Non-Muslim peoples of the Levant’, examined the English perceptions of the ethnic and religious minorities of the Ottoman Empire. English interest in the Levantine populations was motivated by the emerging literature with recommendations for travellers to gather information on geography, languages, government, religions, peoples and manners. English observers of the Levant were often impressed by the mobility and diasporic movements of the Greek, Armenian and Jewish communities of the Ottoman Empire. The fact that these communities lived under the rule of an Islamic polity, and the widespread use of Arabic by the Christian communities, was often perceived as a worrying sign of Islamization that undermined their unique identity and revealed a committed allegiance or acceptance of the rule of the Great Turk. The fact that the biblical regions between the Mediterranean Sea and the River Jordan were under Muslim rule, and occupied by a diverse population formed by Muslims, Jews, Orthodox Greeks, Armenians, Catholics and Syriac Christians, favoured the development of an idea of moral decadence of the heartlands of Christianity which simultaneously praised the superiority of England and Protestant Christianity. Jerusalem and the Holy Land were also considered to be the most adequate places to examine in situ the Jews, since this region was their ancestral home, and their customs less exposed to alien influences. Such concerns with the religious and ethnic integrity of the non-Muslim peoples of the Levant often reflected growing English anxieties related to the occupation of Ireland, the fragmentation of English Protestantism into different churches, and the commercial and colonial expansion in the Atlantic and Asia.

A roundtable coordinated by Nandini Das (TIDE) closed the seminar. The three speakers were invited to comment on the state of their field. Jyotsna G. Singh stressed the need to study the historical evolution of Islamic societies, in particular the Safavid and Mughal empires, and their connections to regions outside the influence of Islam as a central part of the early modern and contemporary worlds. Together with the need to explore with more detail Robert Cecil’s influence in the English efforts to extend diplomatic contacts to China and the Islamic world, Matthew Dimmock emphasized the relevance of understanding the evolution of English taxonomies employed to describe other peoples and religions, especially through comparative studies of English and other European experiences. Following these observations, Eva Johanna Holmberg accentuated the importance of collaborative works between different experts in the field, giving as an example the growing interest in merchant cultures and networks in the study of cross-cultural exchanges.

The issues and concerns raised by the speakers during the roundtable echoed the recent scholarly debates on Anglo-Islamic relations such as the panels on 'Globalism' and 'England and Islam' at the last annual meeting of the Renaissance Society of America (30 March – 1 April 2017), where scholars of the Islamic world have noted that the establishment of cross-linguistic collaborations between English scholars and experts on Islamic polities are renewing the field.