Skip to content
To the TIDE Blog...
TIDE welcomes Sarah Howe, as our visiting writer for 2018

TIDE were delighted to welcome Sarah Howe, our visiting writer for 2018, to Liverpool this week for a series of events which drew visitors from across the university and the wider public. Sarah Howe’s first book, Loop of Jade, won the TS Eliot Prize and The Sunday Times/PFD Young Writer of the Year Award, and was shortlisted for the Seamus Heaney Centre Poetry Prize and the Forward Prize for Best First Collection. Sarah is also a lecturer in poetry at King’s College London. 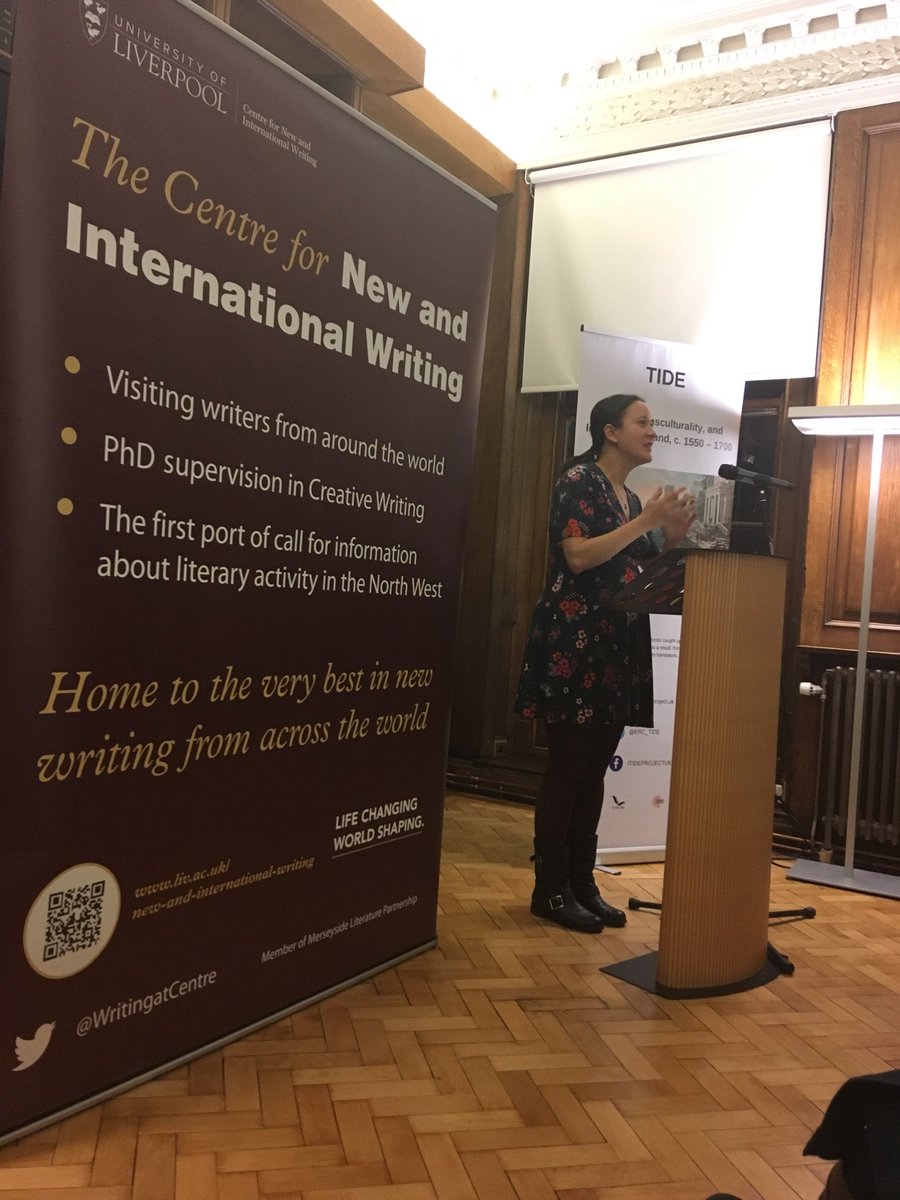 Sarah Howe TIDE visiting writer for 2018 reading some of her recent work on the BBC Radio 4 series ‘Conversations on a Bench'.

Run by the University of Liverpool’s Centre for New and International Writing, the Miriam Allot Visiting Writers Series hosts a diverse range of emerging writers every year. For the second event of this year’s series, the Centre co-hosted a reading with TIDE on 14 November featuring Sarah Howe and Anthony Joseph, the Colm Tóbín Fellow in Creative Writing at the University of Liverpool. Held in the Old Library in the School of Arts, the two authors read selections of their work to a large and appreciative audience of academics and non-academics alike. Anthony Joseph, who kicked off the readings, is a poet, novelist, musician and lecturer, selected in 2005 as one of fifty black and Asian writers who have made major contributions to contemporary British literature. He is the author of four poetry collections as well as six critically-acclaimed albums and a novel, The African Origins of UFOs, and has received an AHRC postgraduate scholarship to complete his doctoral thesis, a ‘fictional biography’ of Lord Kitchener. Rather than the famous Kitchener of WWI war posters, this Lord Kitchener was a Trinidadian calypsonian who arrived on the Empire Windrush, and features in the famous footage of its arrival singing ‘London is the Place for Me’. Anthony shared parts of this work at the reading, sharing emotive and entangled stories that highlighted the resonances between modern Caribbean-British migrations, and TIDE’s focus on issues of transculturality and in-betweenness in the early modern period. This was apparent in Anthony’s poem about the oceanic tides that carried migrants across the Atlantic towards England, and in the extracts he shared from his upcoming novel, Kitch, where characters discuss the differences between Trinidad and London, and the attitudes they are faced with on arrival. 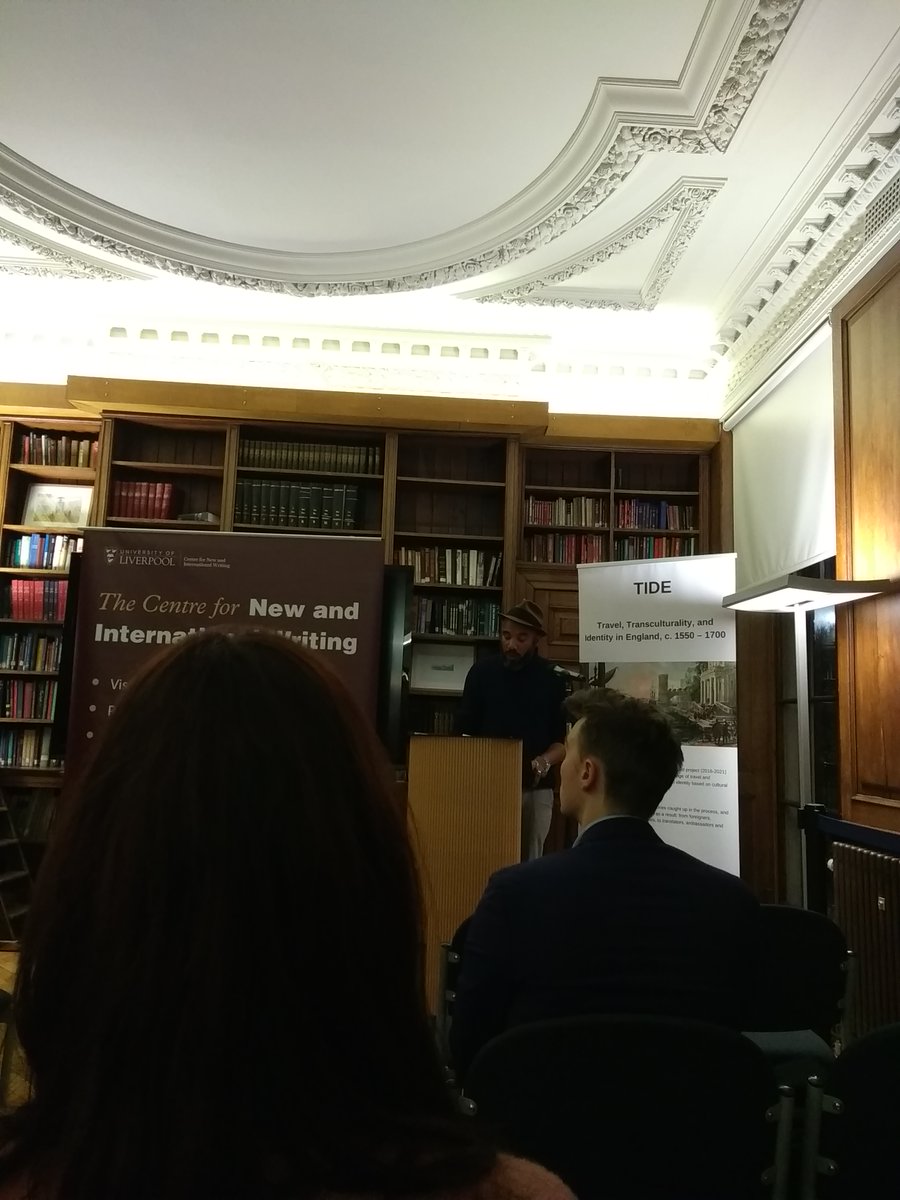 Anthony Joseph, the Colm Tóbín Fellow in Creative Writing reading from his new work at the Miriam Allot Reading.

Sarah Howe read select poems from Loop of Jade, and treated the audience to pieces from her newest unpublished work. Sarah’s interest in Renaissance words and images emerged from her introduction to her first reading, which she dedicated to ‘all the early modernists out there’. What followed was a moving poem about memory and human fragility, as she reminisced about sneaking into the Fellows’ Garden at night during her undergraduate days in Cambridge to dance around Milton’s mulberry tree. She read ‘The Countess of Pembroke’s Arcadia’, a poem imagining the death of the Renaissance poet Sir Philip Sidney in the Netherlands in the 1580s, to the obvious delight of TIDE director Nandini Das. Sarah also introduced her recent work on the BBC Radio 4 series ‘Conversations on a Bench’, where poets choose a bench from which to sit and converse with strangers before transforming their experience of these conversations into verses of their own. Sarah chose the only bench in London’s Chinatown, outside a bubble tea shop on Gerrard Street. Her poems conveyed the experience of a gambler – Gerrard Street being the street with the highest concentration of betting shops in the UK – facing the devastating costs of his addiction, with the struggles of an illegal immigrant desperate to stay with his family, and the story of a young ‘BBC’ man – ‘British-born Chinese’ – struggling with the perception of his identity as a constant state of in-between.

On November 15, TIDE held a workshop with Sarah Howe for creative writing PhD students. The event offered these students the opportunity to share their work with Sarah, who commented on their work and offered feedback in an interactive session. The students unanimously gave glowing feedback afterwards, many commenting on how useful they had found the chance to critically reflect on their work with a professional poet. While not all students had heard of the work done by TIDE before, the workshop generated interest in future events run by the project, and helped them draw links between modernity and early modernity in ways they hadn’t considered – a definite success!