Skip to content
To the TIDE Blog...
Looking back on our 20th November TIDE seminar ‘English Travellers, Spies, and Diplomats in Foreign Courts’

On 20 November, TIDE held its first seminar of the academic year on the theme of ‘English Travellers, Spies, and Diplomats in Foreign Courts’ with Joan-Pau Rubiés (Universitat Pompeu Fabra, ICREA) and Nadine Akkerman (Leiden University). These two excellent papers prompted a great deal of discussion amongst the attendees, despite an unexpected fire alarm. 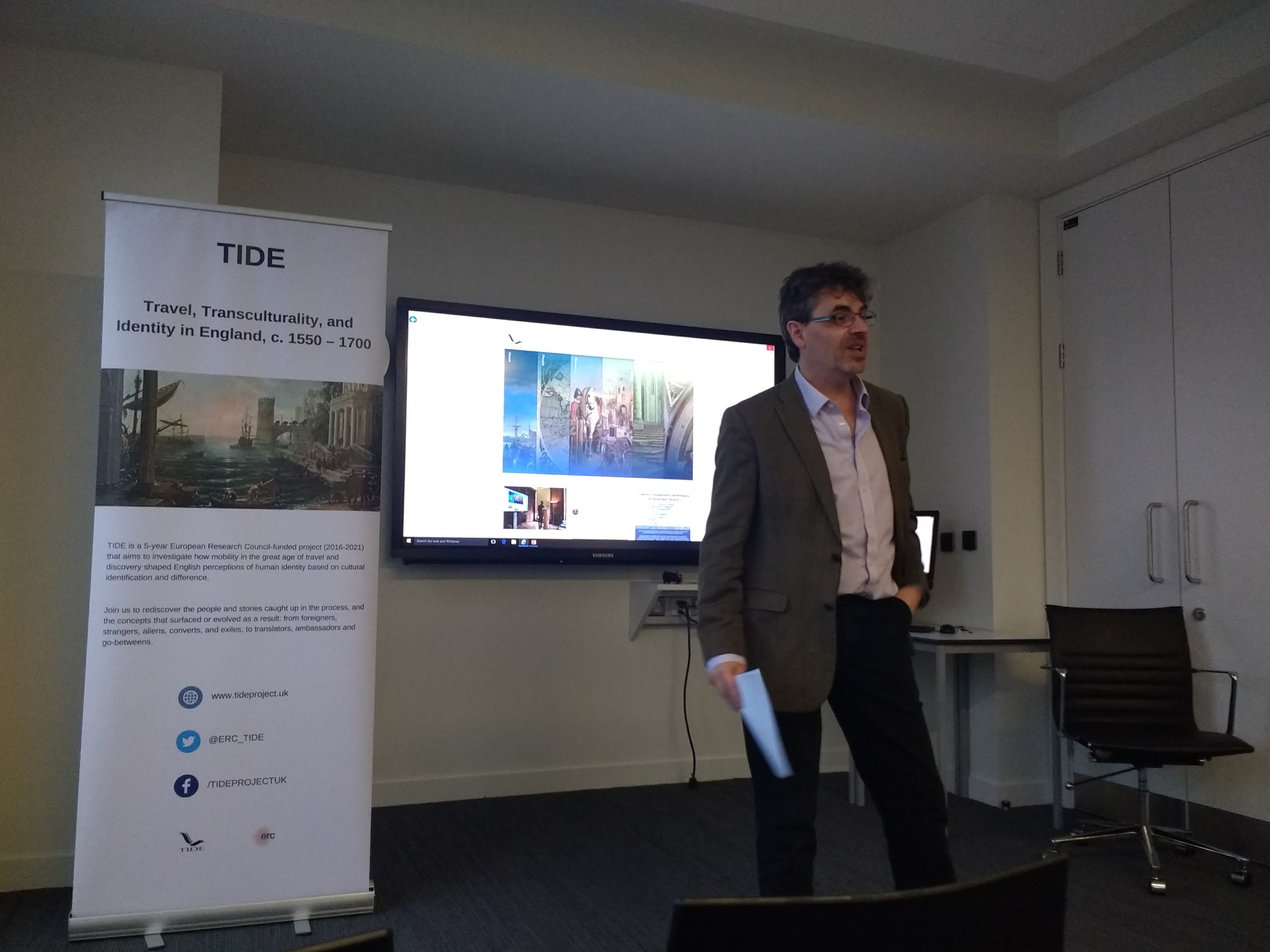 Joan-Pau Rubiés’s paper, ‘Traveller, observer, spy: assessing the status of English accounts of the Ottoman and Mughal states in the seventeenth century’, explored existing definitions and categories of early modern travellers, as well as the status of knowledge and knowledge production through travel. The most influential and successful collection of travel accounts was that edited by Giovanni Battista Ramusio, who proposed a critical model of systematic verification based on the principle that empirical experiences and observations of modern travellers could correct or update knowledge provided by classical authors. This contributed to the emergence of a new type of traveller: one who travelled motivated by the value of acquiring knowledge for knowledge’s sake and aspired to produce new forms of knowledge for an emerging and cosmopolitan republic of letters, rather than simply fulfilling specific political, economic or religious aims. Examples of this new kind of traveller include Henry Blount, who travelled through the Levant to gain knowledge through ‘ocular’ experience and published his stories in A Voyage to the Levant (1636), and Edward Terry, the chaplain of Sir Thomas Roe’s embassy to the Mughal court, who wrote A Voyage to East-India (1655). Although these authors were engaged with English projects of commercial and colonial overseas expansion, they articulated nationalist rhetoric with cosmopolitan views reflecting the concerns of their wide-ranging audience who, despite different confessional and national backgrounds or allegiances, shared an educational tradition and intellectual practices. Blount’s and Terry’s accounts illustrate how travel writing and the figure of the philosophical travel writer contributed to the formation of a dynamic cosmopolitan intellectual movement which influenced the European Enlightenment. The information provided by these early sixteenth century travel accounts had a profound impact on European intellectual circles, although its accuracy was sometimes uncertain, and as Joan-Pau observed, rumours, exaggerations and ‘fake news’ were alive and well in the seventeenth century. Similarly, such journeys sparked fear that by gaining knowledge of other countries, travellers would be corrupted and lose their connection to home, becoming citizens of nowhere. The political concerns of the twenty first century, it transpires, are not so new after all. 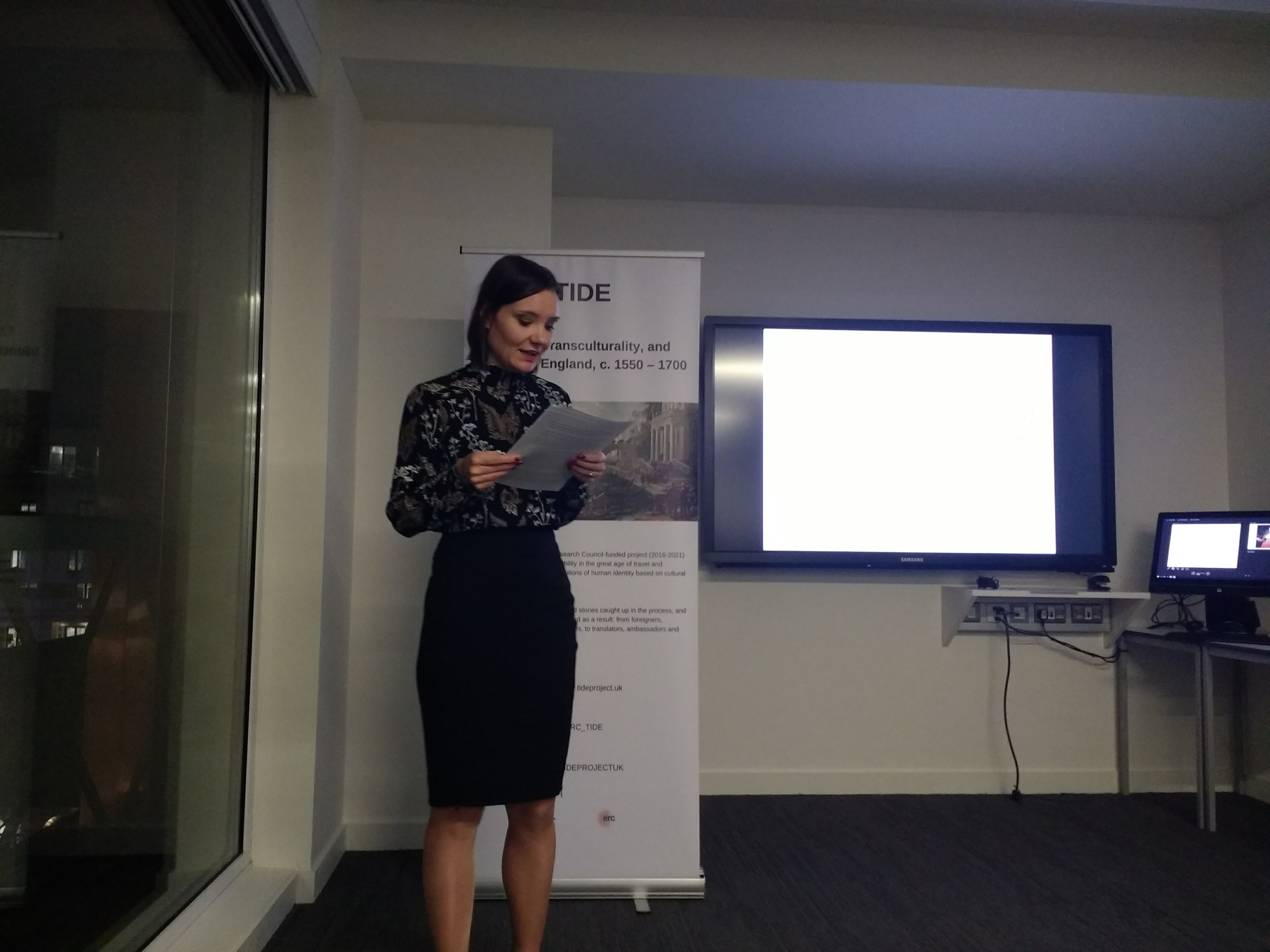 Nadine Akkerman reading from her paper on ‘Informal Diplomacy: The Correspondences of 17th Century Ambassadors’ Wives and Women Spies’.

Nadine Akkerman’s paper on ‘Informal Diplomacy: The Correspondences of 17th Century Ambassadors’ Wives and Women Spies’ explored the fascinating role of women as intelligencers in seventeenth century Britain, despite a dramatic interruption by the fire alarm. Women’s letters have traditionally been assumed to contain ‘domestic’ content about marriage and children and so were often overlooked by censors. By the seventeenth century women had established ways of using this status to disseminate sensitive information, with Lady Carlisle hiding the news that ‘10,000 soldiers rise against the King’ amidst exhortations for her husband to return to her and ‘the babe in my belly’. By disguising the contents of their letters, women could use typically ‘female’ discourses about marriage and children to their advantage. The wives of ambassadors – or ambassadresses –occupied central and privileged positions at court and became integral to negotiations. Using the same means as female spies, these ambassadresses similarly manipulated gender prejudices to conceal or pass information, with some performing this role without the knowledge or permission of their husbands. As with men, there was a thin line between diplomacy and intelligencing, and the question rose as to whether an ambassadress could be an honourable spy. They certainly functioned as such, with Countess Rivers, Lady Aubigny and the Percy sisters as particularly prolific examples, though there is no appropriate term for this specifically female power. There are also significant archival issues which make the lives and roles of these women hard to trace as considerably fewer female penned letters have been preserved, while the role of intelligencer also means that sensitive letters may have been destroyed to protect their senders. As Nadine noted, the best spy is the one who leaves no trace – making these women spies some of the best.