Skip to content
To the TIDE Blog...
The Chinese Convert

On 5 September 1687, the University of Oxford offered a banquet in honour of James II at the Bodleian Library. The king seemed to have been less impressed by the pantagruelian menu of 111 hot and cold dishes prepared by the university, than with the Bodleian catalogue. After taking his seat, James asked if the library had a book translated by a Jesuit. The book in question was the Confucius Sinarum Philosophus translated by Philippe Couplet, a Flemish Jesuit who had been touring Europe since 1684 as the procurator of the Jesuit China mission. The king’s request was motivated by his recent encounter with Couplet’s Chinese assistant, Michael Shen Fuzong, who visited England between March and December 1687. 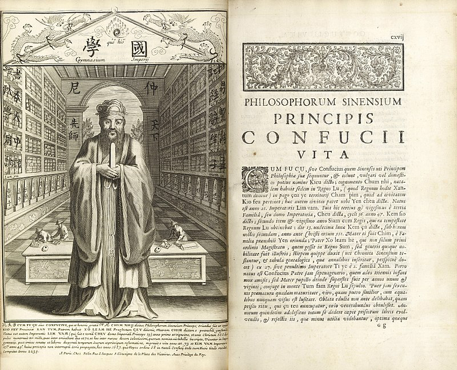 James was particularly impressed by Shen, who had become a sort of celebrity since first arriving in Europe in the winter of 1684. Immediately after landing in the Dutch port of Enkhuizen, Couplet noticed that the rare presence of a Chinese captivated the attention of Europeans, and he used his assistant as an exotic attraction. Shen was always dressed in Chinese clothing in his public appearances, and although the son of Christian parents, Couplet presented the young Chinese Jesuit novice as a convert to illustrate the apparent proselytizing success of the Jesuits, and to instigate the curiosity of crowds, ecclesiastical authorities, scholars and royal courts. In Paris, a large crowd went to Montmartre to attend a mass said by Couplet and the ‘Chinese convert’. In an audience with Louis XIV, Shen appeared in a lavish Chinese silk tunic adorned with dragons, performed a kowtow bow, ate with chopsticks and even taught the French king how to use them. Fascinated by Shen and the array of Chinese curiosities brought by Couplet, Louis XIV ordered to all fountains in Versailles to be turned on as a homage to the ‘Chinese convert’. More importantly, the meeting with the Flemish Jesuit and his assistant paved the way to Louis’ decision to send five Jesuit ‘Mathématiciens du Roi’ to Beijing in 1685.

Shen also caused a sensation in Rome in 1685. He was received by the Father General of the Society of Jesus, prominent Roman aristocrat families, and met Queen Christina of Sweden, who was particularly curious about Chinese tea habits. Pope Innocent XI was also impressed by Shen and the Chinese library that Couplet gifted to the Holy See. Despite the impact caused by the ‘Chinese convert’, the pope refused to take a final decision on the debates over the Jesuit accommodation of Chinese rites and customs, the main reason for Couplet’s tour.

Confronted with the pope’s indecision, Couplet decided to prolong his stay in Europe and continue his propaganda tour of the activities of the Jesuit missionaries stationed in China. The Flemish Jesuit and his assistant visited Florence and other cities in Northern Italy, before returning to Paris where Couplet published his Confucius Sinarum Philosophus. On 7 March 1687, Shen left Paris for London in the company of another Jesuit, the Italian Francesco-Maria Spinola, to prepare Couplet’s visit to the English capital in December. The ascension of James II raised some hopes across Catholic Europe that England would no longer be a champion of Protestantism, and Couplet believed that the English king, like his Portuguese, Spanish and French counterparts, would be interested in supporting the Jesuit overseas missions. Besides, a visit to the English royal court at the precise moment when the Confucius Sinarum Philosophus was being published in Paris could be used as an exceptional moment to publicise a work that the Jesuits believed that would support their accommodationist practices in China. As in Paris or Rome, Shen’s presence in London caused a sensation. Shortly after their arrival, James granted an audience to Shen and Spinola at St James’ Palace. Fascinated with the ‘Chinese convert’, the king instructed Sir Godfrey Kneller to paint a full length portrait of Shen to hang in the king’s private bedchamber. The painting evoked both the exoticism surrounding Shen, as well as the king’s conversion to Catholicism. 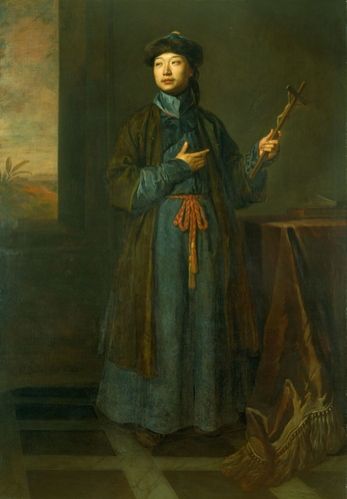 Shen’s presence in London coincided with a rising in interest in Chinese culture in England. Works such as John Webbs’ exaggerated and rather fantastical An Historical Essay Endeavoring a Probability that the Language of the Empire of China is the Primitive Language (1669), re-issued in 1678 as The Antiquity of China, and the regular translations of works from Dutch merchants and Jesuit missionaries on subjects from Chinese medicine to philosophy stimulated the interest of English scholars. After being informed about the ‘Chinese convert’, Thomas Hyde, holder of the Hebrew and Arabic chairs at Oxford and under-keeper of the Bodleian Library, invited Shen to visit Oxford and help him to catalogue and annotate the Chinese books and manuscripts in the library, including The Selden Map of China. Shen accepted the invitation, and his four weeks in Oxford are considered to be a seminal moment for English sinology. His collaboration with Hyde allowed English scholars to know, for the first time, the titles and contents of the mysterious Chinese works of Oxford. After cataloguing the Bodleian Chinese books, Hyde developed his interest in China, and planned to write a treatise on Chinese language based on his conversations with Shen. During the banquet held at the Bodleian in homage to James II, Hyde told the king, who was curious about the work of the ‘Chinese convert’ at the library, that he had ‘learnd many things of him’. As a testimony to Shen’s influence on his work, Hyde decided that in his official portrait for the Bodleian Library he should be depicted holding a scroll with Chinese characters. 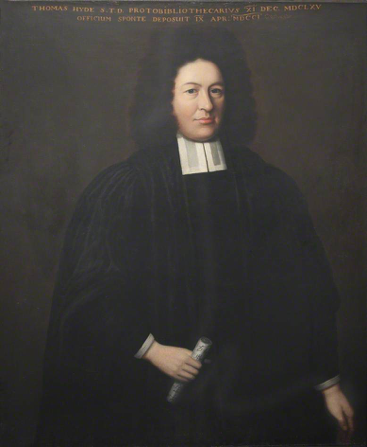 After finishing his work in Oxford, Shen returned to London where he had regular contacts with curious members of the Royal Society, including Robert Boyle. In April 1688, amid the political turmoil that led to the overthrow of James II, Shen travelled to Lisbon where he took his first vows as a Jesuit on 9 October 1690. One year later he embarked to Goa to complete his training before returning to China, but he died on 2 September 1691, near the coast of Mozambique.

The European reliance on Chinese sources and go-betweens was far from unique. The sixteenth century Portuguese humanist João de Barros counted on his collaboration with a well-educated Chinese, who was probably brought into Portugal as slave, to translate Chinese manuscripts and books. As Shen toured Europe, Emmanuel de Siqueira, also known as Zheng Manuo, a converted Chinese who joined the Jesuits, studied and worked in Rome, Bologna and Coimbra between 1651 and 1688. And in Paris, Shen also collaborated with Melchisédech Thévenot, the librarian of the Bibliothéque du Roi and one of the founders of the Académie Royale des Sciences. However, the encounter between Hyde and Chen offers a rare glimpse of an early modern encounter, and intellectual collaboration, between China and England in particular.