Skip to content
To the TIDE Blog...
Celia’s Handkerchief 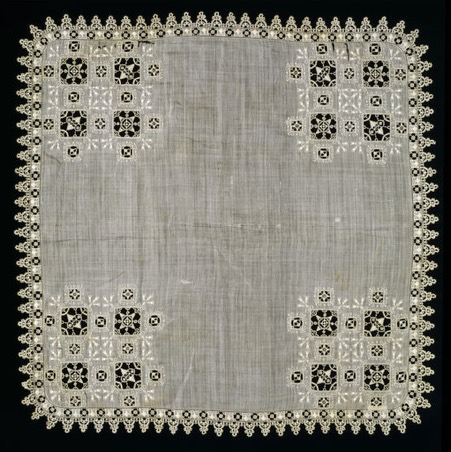 I have been thinking a lot about handkerchiefs recently. This was an unexpected development in my research on how the early modern English imagined the commedia dell’arte – a form of Italian comedy where professional players (comici) perform as stock characters (maschere) and semi-improvise around a written plot (scenario). However, there is a scene in Ben Jonson’s Volpone in which this object seems bound to English ideas of the Italian professional theatre. Act II.2 of the play begins with a masked Volpone, disguised as the mountebank Scoto of Mantua, taking to a trestle stage in the Piazza San Marco with his servant Nano, dressed as Venetian street entertainer ‘Zan Fritatta.’[1] As a crowd gathers, Scoto launches into a lengthy oration denouncing the quack cures of licensed physicians and celebrating the near-miraculous benefits of his own ‘Oglio del Scoto.’[2] He haggles with his audience, but when the price has decreased to sixpence, he’ll negotiate no longer: ‘Therefore, now,’ he says, ‘tosse your handkerchiefes, chearefully, chearefully.’[3] Celia, who enters at a window above at some point during the performance below, drops her handkerchief into Scoto’s outstretched hand below. He catches or picks it up off the ground and presses it to his lips: ‘Lady, I kisse your bounty.’[4] At this moment, Corvino, who we can presume has been watching the spectacle unfold, enters and beats Volpone away

This scene is often cited as evidence of English fluency in the precepts of the commedia dell’arte. It is the most explicit description of the form in English print from the period and, considering England’s sporadic contact with the Italian companies of the day, it is also a surprisingly accurate description of how performance is structured: a streetscape with houses for entrances and exits; the use of windows as properties for women to interact with their husbands, lovers, and servants; the masks of Francescina, the courtesan or serving woman, Pantalone, the Venetian magnifico, and Flaminio, the innamorato. Even when Corvino comes on stage to break up the scene, it continues to resemble the commedia dell’arte. He rages and swears oaths like the neoclassical bravura, and touches on a narrative found throughout the extant collections of commedia dell’arte plots: a shut-away woman hoodwinks her jealous husband and begins an affair from above with a younger, more virile man below.

I would argue that this episode says little about English knowledge of the commedia dell’arte. Mountebanks, windows, handkerchiefs – none explicitly invoke the semi-improvised comedies nor the performance practices of the professional companies of Cinquecento Italy. Rather it seems to me that this scene deliberately draws attention to the horizon of interpretation available to the spectator when certain props (and handkerchiefs in particular) are moved or manipulated in certain ways. A seemingly innocuous action like dropping a handkerchief from a balcony triggers certain associations and expectations based on the spectator’s prior experience of handkerchiefs falling from windows on stage, as well as the cultural life of the object outside the world of the play. In an age preoccupied with the ability of clothing to mould and shape subjecthood, handkerchiefs were often exchanged between lovers as tokens of remembrance. The antiquary John Stow would note how the young women of London would present small handkerchiefs with tassels ‘in the Frenche fashion’ to their preferred suitors.[6] This symbolic gesture was heightened by the proximity of the handkerchief to the body, and instilled with a certain eroticism by the intimacy of its primary use: wiping away bodily excretions. By willingly relinquishing a handkerchief, then, Corvino argues that Celia permits Scoto to touch her body. When Scoto ‘most sweetly, kissed the receipt’, he kisses Celia.[7]

However, the way in which Corvino conceptualises this ‘infidelity’ underscores how diverse experiences determine the horizon of interpretation. Before he interrupts the performance, he is first a spectator. Watching unseen from the stage or the pit, the spectacle unfolding before him triggers the same cognitive processes as his fellow audience members; however, he interprets according to experience. ‘You were an Actor,’ he bellows at Celia, ‘with your handkerchief.’[8] Such a public display of purported licentiousness reminds Corvino, a Venetian and fellow countryman of the old cuckold Pantalone, of the women actors of the commedia dell’arte and the lascivious comedies of his homeland. Here Jonson invites us to consider how experience shapes interpretation whilst, in a typically Jonsonian fashion, showing off his own knowledge of an intriguing foreign dramaturgy.