Skip to content
To the TIDE Blog...
Telling Tales: Hakluyt and Ramusio 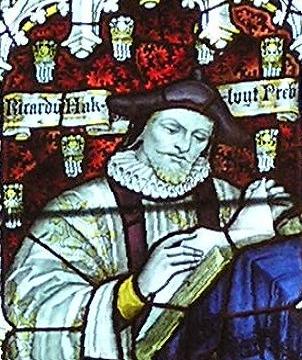 Back in January I spent an afternoon transcribing and translating part of the Bodleian’s copy of Delle Navigationi et Viaggi, Giovanni Battista Ramusio’s Venetian collection of travel narratives. As part of my ongoing research comparing Ramusio’s work to Richard Hakluyt’s Principal Navigations, I’ve been looking back over this material during lockdown.

One of the stories in Ramusio’s Navigationi that fascinates me is his retelling of Marco Polo’s return to Venice. Ramusio frames his knowledge of the tale through chains of oral history, writing that ‘since I was a young man I have heard much spoken [about this] by Gasparo Malipiero, a very old gentleman and senator of singular kindness and integrity, who had his house on the canal of Santa Marina […] [he] reported to have heard [this story] from his father and ancestors.’[1] This opening situates his retelling within localised oral tradition to establish Malipieros’s authority as a ‘true’ Venetian. In turn, Ramusio’s childhood link to Malipiero connects him to this wider chain, contextualising his knowledge within the city’s social networks to remind the reader that he is entirely Venetian, and thus possessed of private information which only he can share with them.[2]

After establishing his place within this tradition, Ramusio proceeds to tell the tale of Polo’s triumphant return. He describes Polo and his men hosting a banquet for their disbelieving family, appearing first to greet their guests dressed in ‘long floor-length robes of creamy satin’, stripping these off to reveal robes of ‘creamy damask’, removing these in turn to put on ‘velvet robes’, before finally changing into the ‘habit of usual [Venetian] clothes.’[3] Polo then left the table to bring back ‘the worn coarse cloth’ the men had worn when they first returned (then described as ‘ill ordered’). He began unpicking the seams and hems of these with a sharp knife, bringing out ‘rubies, sapphires […] diamonds and emeralds which had been sewn into each of these’. The guests, seeing this, ‘truly knew that these were the honoured gentlemen whom they had doubted and gave them tremendous honour and reverence.’[4] Ramusio’s tale begins with the classic trope of the unrecognised traveller’s Ulyssean return, before moving into traditional folkloric triplicate patterning with the three outfits and rich descriptions of fabric and jewels.. This narrative stands out in Navigationi for its tonal differences to other material; its unusual structure emphasises its origin and re-iterates Ramusio’s connection to Venetian tradition.

Like Ramusio, Hakluyt positioned himself as a link within chains of oral history to establish an authorial identity. In his telling of ‘The voyage of M. Hore and divers other gentlemen to Newfoundland’, he notes that Oliver Dawbeny ‘was in this voyage’ and ‘told M. Richard Hakluyt of the middle Temple these things following.’[5] Further on, he tells the story of their return:

Buts was so changed in the voyage with hunger and miserie, that [his parents] […] knew him not to be their sonne, until they found a secret marke which was a wart upon one of his knees, as hee told me Richard Hakluyt of Oxford himselfe, to whom I rode 200 miles onely to learne the truth of this voyage from his own mouth.[6]

Hakluyt uses the same narrative structures as Ramusio to reassert his claim to authorial authority: the hidden truth of the Ulyssean unrecognised traveller, the unimpeachable authority of oral tradition, and an authorial connection to this history. Hakluyt bolsters his authority with these explicit connections to the institutions of ‘the middle Temple’ and ‘Oxford’: formal institutions whose authority here sits alongside the passage of knowledge through a 200-mile truth-seeking ride. Ultimately, both writers aim to establish the ‘truth’ of their tales through this process of refracting oral history into printed narrative, a fascinating process I am only beginning to unravel.