Skip to content
To the TIDE Blog...
‘On Belonging 2’ Conference Report 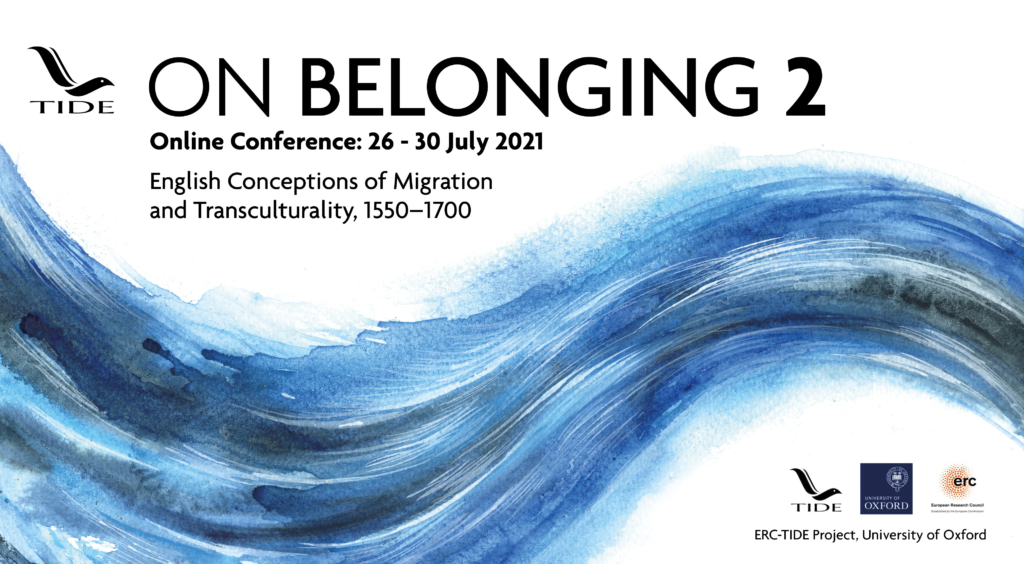 Almost exactly three years after our first ‘On Belonging’ conference, the TIDE team organised a digital follow-up to expand on and reflect upon the conversations we have had so far. Though COVID-19 restrictions took us online, running a virtual event also offered a number of benefits. We were able to offer a longer, much more expansive conference than before, and also trial several new initiatives to help make academic conferencing more inclusive, accessible, and communal. Spanning 5 days, ‘On Belonging 2: English Conceptions of Migration and Transculturality, 1550-1700’ included 2 social events, 15 panels, 3 roundtables, and 1 book launch, totalling 66 papers, presentations, roundtables, and creative sessions that amounted to 24 hours’ worth of digital content. Forgoing the traditional keynotes meant that each voice had an equal weight in these discussions of belonging, identity, migration, and race regardless of career stage. Pre-recording the sessions and making them available on YouTube and Crowdcast for preview and catch-up recognised the time restrictions of our different work and personal commitments, giving attendees the opportunity to engage in these conversations at a time of their convenience. For those who could not attend ‘On Belonging 2’ at all, proceedings were live-tweeted from the TIDE account across the week. In total, the account tweeted 500 times during the course of the conference, resulting in 114 new followers and over 24,000 profile visits. Without costly and time-consuming international travel, we were able to bring academics from Seoul and the US in conversation with academics in Oxford, and provide ECRs from Germany, India, and elsewhere with a platform to discuss their ideas on border crossing and borders crossers. In total, the conference’s innovative digital platform successfully brought together 66 scholars across six continents. The low running costs also allowed TIDE to offer attendance to all free of charge. In lieu of a fee, participants and attendees in full-time employment were instead encouraged to donate a discretionary amount to the Society of Renaissance Studies (SRS) in order to help fund their ECR and inclusivity initiatives – an innovative addition to registration that has helped set the template for how the SRS offers financial support.

It was both heartening and stimulating to see such a broad range of fields, disciplines, and perspectives brought into fruitful conversation across the week. For Day 1, sessions on ideas of transculturality, identity, and contemporary cultural perceptions provided a useful broader context for the conversations to come. A session on recording early modern travel experiences discussed rhetoric, life-writing, imagined worlds, and the racialisation of sound across several different forms of travel writing, confessional literature, and even legal examinations. The people who wrote these texts and imagined these worlds were the subject of the second session of the day, with papers on creative Italianate English identities, diplomatic belonging at the Mughal court, the perambulations of Italian performers in England, and the extent of female mobility in the period. In the afternoon, three five-minute lightning talks on animal and human go-betweens were followed by a session on cultural perceptions and seventeenth-century academic knowledge of Islam and ideas about Ottoman Culture. The final event of the evening, a roundtable organised by the Medieval and Early Modern Orients (MEMOs) project, took a wider lens to these kinds of cross-cultural encounters, providing fascinating insights into the social, political, economic, and cultural exchanges between England and the Islamic worlds in the early modern period.

Day 2 opened with a panel on the geographies of devotion, taking us from Caribbean pearl fisheries to the Ottoman Empire, and out on the open ocean for thoughtful discussions on seventeenth-century colonial meditations, Anglican obsession with the Greek Orthodox Church, and the religious significance that one English traveller gave his maritime experiences. In the afternoon, the sessions focused more on language, multilingualism, and different forms of translation. Following two insightful lightning talks on borderscapes in Aphra Behn’s Oroonoko and the Welsh heritage of two celebrated Italianate Englishman, a session on early modern translation cultures tackled standardisation, facilitating English access to Italian republicanism, and the role and representation of native interpreters in a celebrated translation of Peter Martyr. This session, comprised of members of the Paris Early Modern Seminar and the Translation and Polyglossia in Early Modern England project, provided attendees with fascinating and wide-ranging insights into the world of early modern polyglossia, from Italian miniatura to English limning, loanwords, the political ambitions of ‘truthful’ chronicles, and transcultural terminologies. The emphasis that all of these papers placed on the multiplicity of meaning attached to single terms led nicely into the final event of the day: the launch of Keywords of Race, Identity and Belonging in Early Modern England, a collection of essays on terms that were central to the conceptualisation of identity, race, migration, and transculturality in the early modern period. Members of the team were joined by Professor Jyotsna Singh to discuss the origins of the project, the process of choosing, drafting, and editing the keywords, and using the essays in KS3, undergraduate, and postgraduate teaching to interrogate ideas of belonging both then and today.

Day 3 focused more on conceptualisation of difference and belonging in a commercial and colonial context, beginning with an extraordinary roundtable that traced the debates over and development of foreign birth in English law. This was followed by a session on joint-stock companies, with each of the three panellists speaking on either culture, community, or corporation as/for overseas governance. An afternoon session continued on the theme of proto-colonial venture, with participants speaking on various attempts to map and demarcate difference and belonging in works of navigation, political commentary, and chorography. The often violent displacement that occurred when these imperial ambitions were realised was explored in the next panel with presentations on translation and enslavement, nonvolitional travel, and the exile’s continual search for home. Our role in presenting these stories and texts was the subject of the day’s last event, a rich insight from esteemed scholars on the process of editing early modern travel and colonial writing.

On the fourth and final day of the conference, attendees were treated to a whistle-stop tour of migrant London, with papers looking at multilingualism at the Royal Exchange, the Evil May Day riots of 1517, Italian gardens, and needleworkers of African descent in the parish of St Botolph without Aldgate. We then turned to the representation of these migrants and other groups on stage and in print with fascinating papers on humoral discourses of race and female otherness in Shakespeare’s plays, women under siege in English romance, and the construction of English and Moorish identities in the playhouse. The following session focused on a different, exceedingly popular kind of early modern entertainment: bear-baiting. The AHRC-funded Box Office Bears project treated us all to a masterclass in interdisciplinary research with insights into historical bear-baiting from theatre scholars, geneticists, archaeologists, and Zooarchaeologists. With our appetite for more ursine research whetted, the final event of ‘On Belonging 2’ asked us to consider the implications of the so-called ‘ontological turn’ on early modern conceptions of transculturality. For a conference that brought together scholars working in different fields both in the humanities and STEM, a discussion of Viveiros de Castro’s essay ‘And’ which posits the question, ‘what is at stake in this seemingly innocuous yoking together of heterogeneous fields?’, was a suitably challenging and provocative note to conclude on.

When organising a conference of this size using a more or less unfamiliar format, one is bound to run into some challenges and obstacles, even when in the safe hands of our superb tech team: Dr Sam Robinson, Dr Amy Chambers, and Dr Peter Good. However, perhaps the biggest challenge we faced when putting ‘On Belonging 2’ together was creating a productive, sociable, and safe space for participants and attendees. We like to complain about sour wine and suspicious sandwiches at conference coffee and lunch breaks as much as the next person, but that is also where we get to meet the scholars in our field, enthuse about each other’s work, and formulate new ideas. With most of us spending the year in lockdown unable to visit friends, family, and colleagues, and adjusting to the restrictions on research and teaching, we felt it more important than ever to try to replicate this space virtually. The team organised two social events, one for participants and one for attendees. The evening preceding the first day of On Belonging 2, Dr John Gallagher and TIDE’s very own Dr Tom Roberts organised an early modern travel-themed quiz for speakers and chairs. It was a roaring success thanks to John’s matchless hosting ability and some wonderful prizes courtesy of Amsterdam University Press, the Hakluyt Society, and Cambridge University Press. The second social event for both participants and attendees was hosted on the Wonder.me platform. Wonder is a virtual social space in which people can move an avatar between a number of designated ‘areas’ in a room using their trackpad/mouse/arrow keys. Once you move your avatar into an area, you automatically join a Zoom-like video chat with all the other people in that area. In this sense, it imitates that kind of large-group socialising where you can move easily between different groups to talk more with other attendees. Alongside ‘The Mitre’, ‘The Bear’, and other early modern spaces of conviviality, we also set up several areas as virtual ‘publishers’ tables’ where representatives from the Society of Renaissance Studies, Amsterdam University Press, and the Cambridge Elements in Travel Writing series could speak to any interested party about current/forthcoming publications and events.

The atmosphere of conviviality and support during this event and the conference as a whole was a testament to the kindness and generosity of many of those working in our field. We are proud that ‘On Belonging 2’ successfully fostered new and deepened old relationships between scholars of all career stages. Through our shared interest in examining the voices of people inhabiting transcultural spaces, we hope that TIDE has helped build a transnational and transcultural community to continue querying the established canon.